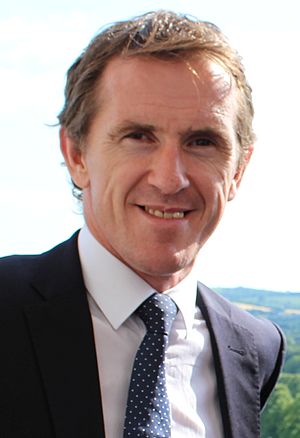 Anthony Peter McCoy OBE (born 4 May 1974), commonly known as A. P. McCoy or Tony McCoy, is a horse racing jockey from Northern Ireland. He lives and races in England.

McCoy won for the first time in 1992. He was 17 years of age at the time. McCoy has rode over 3,850 winning horses. This is many more than any other National Hunt jockey ever. McCoy has been Champion Jockey every year he has been professional. Even in his first season riding in Britain, McCoy won the Conditional Jump Jockeys Title with a record 74 winners for a conditional jockey. McCoy got his first Champion Jockey title in 1995/6. As of 2012/2013, he has won the title 18 times in a row. The old record was 7 consecutive titles by Peter Scudamore.

McCoy has won almost every big race there is. His most high profile winners include the Cheltenham Gold Cup, Champion Hurdle, Queen Mother Champion Chase, King George VI Chase and the 2010 Grand National, riding the horse "Don't Push It".

McCoy has raced in over 13,000 races. This is equal to 31,000 miles or 1.25 times around the Earth. He has had a many of falls since becoming a jump jockey. McCoy has injured many bones in his body. These include middle and lower vertebrae, both shoulder blades, ribs, an ankle, cheekbones, a wrist, a leg, collar bone, fingers and teeth.

McCoy was named BBC Sports Personality of the Year in 2010. He was the first jockey to win the award.

All content from Kiddle encyclopedia articles (including the article images and facts) can be freely used under Attribution-ShareAlike license, unless stated otherwise. Cite this article:
Tony McCoy Facts for Kids. Kiddle Encyclopedia.