Newtownabbey was formed by the merging of seven villages; Carnmoney, Glengormley, Jordanstown, Monkstown, Whiteabbey, Whitehouse and Whitewell. It was formally brought into being on 1 April 1958. Before its inception the expanse fell under the jurisdiction of the Belfast Rural District Council.

By the spring of 2015 Newtownabbey Borough Council will be officially merged with adjacent Antrim Council to form the new Antrim & Newtownabbey District Council under Local Government restructuring plans devised by the Northern Ireland Executive. This name is still to be confirmed. 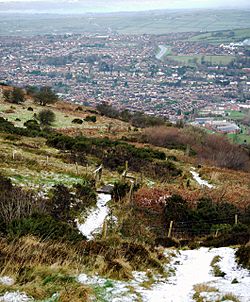 The Glengormley area of Newtownabbey from Carnmoney Hill

Below is a list of townlands that are within Newtownabbey's urban area, alongside their likely etymologies.

The following housing estates have Irish-derived names, although they are not named after townlands:

Until 2014 Newtownabbey operated under its own council comprising Ballyclare, Glengorley, Jordanstown, Carnmoney, Mallusk and Rathcoole. However, from 2014 it has operated as a larger Council after merging with Antrim to create Antrim and Newtownabbey Borough Council. The current electoral ward and areas are:

Whilst the Belfast-Larne railway line serving Whiteabbey and Jordanstown and connects with other stations including the principal stations of Carrickfergus, Whitehead, Larne Town and Larne Harbour, heading "Northbound". And heading "Southbound" the same stations as listed above apply.

Bus services are provided by Metro.

Newtownabbey is twinned with:

Newtownabbey has one sister city, as designated by Sister Cities International:

Local Gaelic games clubs include St Enda's GAC (based near Glengormley) and Greencastle Wolfe Tones GAC (based at Greencastle). Both participate in competitions organised by the Antrim County Board.

Hockey teams based in Newtownabbey include East Antrim Hockey Club, Mossley Hockey Club, and Owls Hockey Club. There are also a number of rugby clubs, an amateur boxing club (Glengormley Amateur Boxing Club), and several cricket teams. These include the Academy and Cliftonville Cricket Clubs (the latter participating in the NCU Senior League).

All content from Kiddle encyclopedia articles (including the article images and facts) can be freely used under Attribution-ShareAlike license, unless stated otherwise. Cite this article:
Newtownabbey Facts for Kids. Kiddle Encyclopedia.