Antrim (from Irish: Aontroim, meaning "lone ridge") is a town and civil parish in County Antrim in the northeast of Northern Ireland, on the banks of the Six Mile Water, half a mile northeast of Lough Neagh. It had a population of 20,001 people in the 2001 Census. It is the county town of County Antrim and was the administrative centre of Antrim Borough Council. It is 22 miles (35 km) northwest of Belfast by rail.

At the beginning of recorded history, the Antrim area was populated by Irish Gaels and was within the territory of Dál nAraidi. According to tradition, a monastery was founded near the present site of the round tower in 495, thirty years after the death of Saint Patrick, to take forward his ministry, and a small settlement grew up around it.

By 1596, an English settlement had grown up around a ford across the Sixmilewater River and All Saints Parish Church has a datestone of 1596 with the words 'Gall-Antrum' written on it meaning 'The Antrum of the English'. Hugh Clotworthy, father of the Anglo-Irish politician John Clotworthy, 1st Viscount Massereene, supervised the building of secure military quarters beside the old Norman motte. This later became the site of Antrim Castle. Hugh was knighted in 1617 and appointed High Sheriff of County Antrim.

A battle was fought near Antrim between the English and Irish in the reign of Edward III; and in 1642 a naval engagement took place on Lough Neagh, for Viscount Massereene and Ferrard (who founded Antrim Castle in 1662) had a right to maintain a fighting fleet on the lough.

The Society of United Irishmen launched a rebellion in 1798, which began in Leinster and quickly spread to Ulster. The United Irishmen had been founded in 1791 by liberal Protestants in Belfast. Its goal was to unite Catholics and Protestants and make Ireland an independent republic. Although its membership was mainly Catholic, many of its leaders and members in northeast Ulster were Protestant Presbyterians. On 7 June 1798, about 4000 United Irishmen led by Henry Joy McCracken attacked the town. The rebels were on the verge of taking the town until British reinforcements arrived. Thanks to a rebel band led by James Hope, most of the United Irishmen were able to withdraw safely. This is known as the Battle of Antrim.

Before the Act of Union, Antrim returned two members to parliament by virtue of letters patent granted in 1666 by Charles II.

Antrim is the setting for the novel All The Little Guns Went Bang, Bang, Bang by author Neil Mackay.

Main page: The Troubles in Antrim

As with the rest of Ireland, Antrim experiences a maritime climate with cool summers and mild winters. The nearest official Met Office weather station for which online records are available is at Aldergrove, under 4 miles to the south of the town centre. 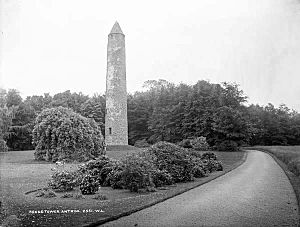 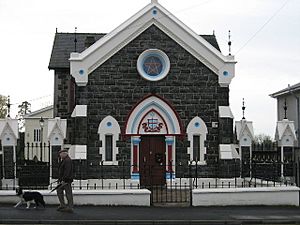 There are many buildings of historic note in the town, especially in and around High Street. The courthouse sits at the end of the street, near the Barbican Gate, the old gateway to Antrim Castle. There are also hidden gems, such as a 19th-century smithy (now a shop) on Bridge Street with a distinctive horseshoe entrance. 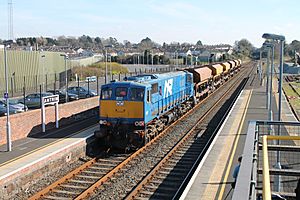 Antrim railway station was opened on 11 April 1848, and closed for goods traffic on 4 January 1965. Served by passenger trains on the Belfast-Derry railway line run by Northern Ireland Railways.

However Aldergrove does not have a proper Airport rail link. connection. 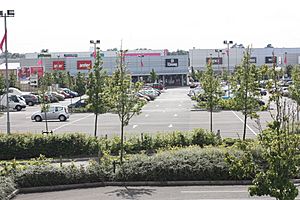 All content from Kiddle encyclopedia articles (including the article images and facts) can be freely used under Attribution-ShareAlike license, unless stated otherwise. Cite this article:
Antrim, County Antrim Facts for Kids. Kiddle Encyclopedia.