Antrim Castle also known as Massereene Castle was a castle in Antrim, County Antrim, Northern Ireland, on the banks of the Sixmilewater River. It was erected in stages between 1613 and 1662. It was destroyed by fire in 1922 and finally demolished in the 1970s. All that remain are a slightly raised grassed platform as well as a freestanding Italian stair tower which was built in 1887 and a gatehouse, which was built around 1818 with twin neo-Tudor towers, with older connecting walls. The gardens are a popular tourist attraction on the Randalstown Road, Antrim. 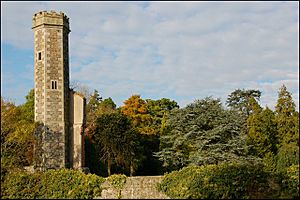 Antrim Castle was built originally in 1613 by English settler, Sir Hugh Clotworthy, and enlarged in 1662 by his son, John Clotworthy, 1st Viscount Massereene. It was through his daughter and heiress, Mary, and her marriage to Sir John Skeffington, 4th Baronet (by special remainder he would become the 2nd Viscount Massereene), that the estate and title came to the latter family. The castle was rebuilt in 1813.

In the 1680s the castle was raided by Jacobite General Richard Hamilton and his men who looted Viscount Massereene's silver plate and other silverware and furniture up to a value of £3000, a considerable loss at the time.

For sometime the castle was used for political conferences; in 1806 Right Hon. John Foster, the last Speaker of the Irish House was reported to have spoken in the Oak Room of the castle at a meeting.

During a grand ball on 28 October 1922, the castle caught fire and was destroyed. Although much of the evidence pointed to arson by the IRA, the official verdict was not conclusive, thus no insurance claim was paid out. The castle remained as a ruin until its demolition in 1970.

Antrim Castle had been rebuilt in 1813 as a three-storey Georgian-Gothic castellated mansion, designed by Dublin architect, John Bowden. The Restoration style doorway of the original castle, featuring heraldry and a head of Charles I, was re-erected as the central feature of the entrance front. It also had tower-like projections at the corners of round angle turrets. A tall octagonal turret of ashlar was added to the front in 1887, when the castle was further enlarged. There was also a 17th-century formal garden, unique in Ulster.

The gardens also featured a long canal with another canal at right angles to it, making a T shape, as well as a motte of a Norman castle. Jacobean-Revival outbuildings of coursed rubble basalt with sandstone dressings were built about 1840. The entrance gateway to the demesne has octagonal turrets. The stable block was later converted for use as a family residence and renamed Clotworthy House. This was acquired by Antrim Borough Council and converted for use as an Arts Centre in 1992.

The formal gardens were the subject of a £6m restoration project, by Antrim Borough Council supported by the Heritage Lottery Fund, to preserve the historic site. Antrim Castle Gardens won the Ulster in Bloom Special Award 2012.

All content from Kiddle encyclopedia articles (including the article images and facts) can be freely used under Attribution-ShareAlike license, unless stated otherwise. Cite this article:
Antrim Castle Facts for Kids. Kiddle Encyclopedia.