Randalstown is a townland and small town in County Antrim, Northern Ireland, between Antrim and Toome. It has a very prominent disused railway viaduct and lies beside Lough Neagh and the Shane's Castle estate. The town is bypassed by the M22 motorway with junctions at both the eastern and western ends of the town. It had a population of 5,126 people in the 2011 Census.

The settlement sprang up within the townland of an Dún Mór (meaning "the great fort"), anglicised as Dunmore. Randalstown was named after the 2nd Earl and 1st Marquess of Antrim, Randal MacDonnell (1609–1683), and has strong links to the O'Neill family. The original stronghold of Edenduffcarrick was built in the 16th century and changed ownership repeatedly until it was renamed Shane's Castle after the new owner, Shane Mc Brian O'Neill. The O'Neill family still reside on the estate.

Dunmore Park was used as a training camp for the Ulster Volunteers during the Irish Home Rule crisis.

Randalstown has a strong history of linen and iron industries. A memorial to this history is in the middle of the town and made from the original turbine used to generate mains electricity for the town and items salvaged from the Old Bleach Linen Company founded by James Webb in 1864. An old linen mill chimney from the Old Bleach factory can be seen from most parts of the town. The Dorma Old Bleach factory which operated from a neighbouring site closed down in 2002.

On 1 October 1989, an IRA car bomb exploded outside the town's police station on New Street causing serious damage to nearby property.

On 8 January 2010, PSNI Constable Peadar Heffron was seriously injured as a bomb exploded under his car on the Milltown Road near Randalstown. Dissident republicans were blamed for the attack. 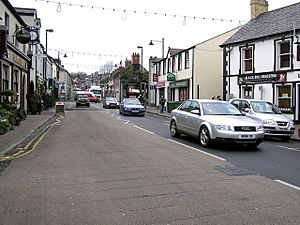 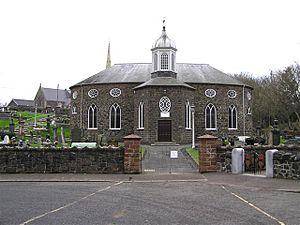 Randalstown is classified as a Small Town by the Northern Ireland Statistics and Research Agency (NISRA) (i.e. with population between 4,500 and 10,000 people). On Census day (29 April 2001) there were 4,956 people living in Randalstown. Of these:

All content from Kiddle encyclopedia articles (including the article images and facts) can be freely used under Attribution-ShareAlike license, unless stated otherwise. Cite this article:
Randalstown Facts for Kids. Kiddle Encyclopedia.