The River Foyle at night in Derry 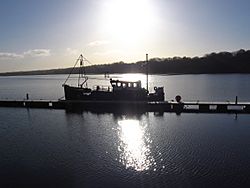 The River Foyle (from Irish: An Feabhal) is a river in west Ulster in the northwest of the island of Ireland, which flows from the confluence of the rivers Finn and Mourne at the towns of Lifford in County Donegal, Republic of Ireland, and Strabane in County Tyrone, Northern Ireland. From here it flows to the city of Derry, where it discharges into Lough Foyle and, ultimately, the Atlantic Ocean. The total length of the River Foyle is 129 km (80 mi). The river separates part of County Donegal from parts of both County Londonderry and County Tyrone. The district of County Donegal that borders the western bank of the River Foyle is traditionally known as the Laggan. This district includes the villages of St. Johnston and Carrigans, both of which are nestled on the banks of the River.

The Irish name is An Feabhal, which refers to Febail, father of the mythical Bran.

The River Foyle is also the fastest-flowing river in Europe for its size, making the construction of bridges across it difficult. In Derry, the main crossing point, there are three bridges. The southernmost bridge, the oldest of the three, is Europe's only road traffic double-decker bridge and is officially known as the Craigavon Bridge (occasionally referred to colloquially as the Blue Bridge). The northernmost bridge, known as the Foyle Bridge, is a much larger bridge and was built to accommodate tall ships at a time when it was envisaged that the city would need to accommodate such vessels. However, this proved unnecessary as the main port was moved several miles north of the city and the large vessels it was designed for never had to come so far south. The Foyle Bridge was planned originally by the Londonderry Development Commission and was intended to alleviate the traffic congestion on the existing Craigavon Bridge and in the city centre. However, political prevarication meant that it was not constructed until the 1980s. Derry's third bridge, the Peace Bridge, is situated behind the Guildhall Square, north of the Craigavon Bridge. The pedestrian and cycle bridge was opened in 2011, intended as a symbol of union between the two sides of the city.

Outside Derry, the only bridge to cross the River Foyle is Lifford Bridge, which was built in the 1960s between Lifford, the county town of County Donegal, on the western bank of the river, and Strabane, a major town in County Tyrone, on the eastern bank.

The tidal Foyle is navigable from the coast to approximately 10 miles inland. The derelict Strabane Canal continued from this point a further four miles to Strabane. Traffic on the Foyle further south than the northern bridge is now more or less restricted to pleasure boats with the occasional tanker coming in the refinery at the northern end of the town. A tour of the Foyle on board a small cruise ship called the Toucan One, once provided tourists a chance to travel along the River Foyle from Derry city centre to Greencastle County Donegal on the shores of Lough Foyle. However, because of a lack of funding from various sources, this venture has now come to a standstill.

Prior to the Plantation of Ulster the fishing rights on the River would have been owned by the O’Neills and the O’Donnells, the Chieftains of Tír Eoghain and Donegal respectively. When the Plantation of Ulster started in 1609 a body called The Honourable The Irish Society had been set up by Royal Charter in 1613 to administer the affairs of the Plantation. The Society was then given the rights to the fishing on the river and on the River Bann, all except the parts of the rivers owned by the Bishop of Derry. In 1944 an action for trespass was taken by the Society against a fisherman from Porthall who they deemed to be fishing illegally. The case was heard by Mr Justice George Gavan Duffy in the high court in Dublin during 1947/48. The case was dismissed against the man. The Society then appealed the decision and also appealed to both Northern and Southern Governments at losing the case. Both Governments agreed to buy the fishing rights for the sum of £110,280 on condition that they drop the appeal. This led to the establishment of a commission to oversee the fishing on the river and on Lough Foyle. The body set up was called the Foyle Fisheries Commission and was established by a Bill passed simultaneously by the Governments of the Republic of Ireland and Northern Ireland on 25 March 1952. The Foyle Fisheries Commission was disestablished on 10 April 2007 with the signing of the Foyle & Carlingford Fisheries Act 2007. The Foyle is believed to be one of the best salmon rivers in Ireland. Details of the fishing regulations are available from the Loughs Agency. The village of St. Johnston, which lies on the County Donegal bank of the river, is a major fishing settlement on the Foyle.

The River Foyle and Tributaries Area of Special Scientific Interest (ASSI) includes the River Foyle and its tributaries i.e. that part of the River Finn which is within Northern Ireland, the River Mourne and its tributary the River Strule (up to its confluence with the Owenkillew River) and the River Derg, along with two of its sub-tributaries, the Mourne Beg River and the Glendergan River. The area encompasses 120 km of watercourse and is notable for the physical diversity and naturalness of the banks and channels, especially in the upper reaches, and the richness and naturalness of its plant and animal communities. Of particular importance is the population of Atlantic Salmon, which is one of the largest in Europe. Research has indicated that each sub-catchment within the system supports genetically distinct populations.

The riverbank has the Belfast-Derry railway line providing a key link to the city of Derry. Trains bring passengers along on the Northern Ireland Railways service along the shoreline of Lough Foyle from onward stations such as Coleraine, Belfast Central and Belfast Great Victoria Street. 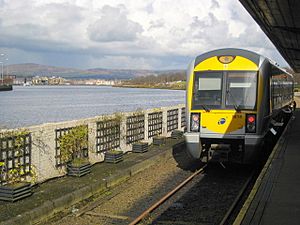 All content from Kiddle encyclopedia articles (including the article images and facts) can be freely used under Attribution-ShareAlike license, unless stated otherwise. Cite this article:
River Foyle Facts for Kids. Kiddle Encyclopedia.