Beragh (from Irish: Bearach, meaning "place of points/hills/standing stones") is a village and townland in County Tyrone, Northern Ireland. It is about 8 miles (13 kilometres) Southeast of Omagh and is in the Fermanagh and Omagh District Council area. The 2001 Census recorded a population of 520.

One of the first known references to the village was on a 1690 Plantation map of Ireland. In the 1820s this village, the property of Earl Belmore, was described as having "one long wide street of very mean houses whose tenants for the most part appear to be poor". The inhabitants mostly worked in trade and agriculture. In 1841 the population was 617, the village having 103 houses. The village had a market patent granted under the name "Lowrystown".

The Portadown, Dungannon and Omagh Junction Railway opened Beragh railway station on 2 September 1861. The Ulster Transport Authority closed the station and the PD&O line on 15 February 1965.

The population of the village decreased during the 19th century:

Beragh is classified as a small village or hamlet by the NI Statistics and Research Agency (NISRA) (i.e. with a population between 500 and 1,000 people). On Census day (29 April 2001) there were 520 people living in Beragh. Of these: 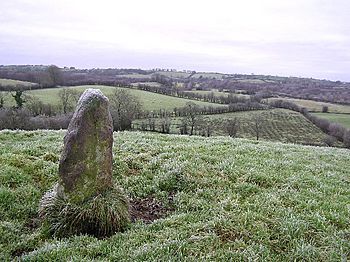 The townland is situated in the historic barony of Omagh East and the civil parish of Clogherny and covers an area of 481 acres.

The village of Beragh is in the townland of the same name and in 1891 had an area of 17 acres.

All content from Kiddle encyclopedia articles (including the article images and facts) can be freely used under Attribution-ShareAlike license, unless stated otherwise. Cite this article:
Beragh Facts for Kids. Kiddle Encyclopedia.