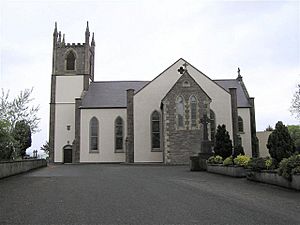 Carrickmore (from Irish: an Charraig Mhór, meaning "the big rock") is a village in County Tyrone, Northern Ireland. It lies in the centre of the county on a raised site colloquially called "Carmen"; between Cookstown, Dungannon and Omagh. An alias name for Carrickmore village is Termon Rock, Termonn being the first element of the parish name Termonmaguirk (Ir. Tearmann Mhig Oirc ‘McGurk’s sanctuary’) and rock referring to the rocky hill on which the village is situated. The McGurks were erenaghs or hereditary lay custodians of the parish's church lands. The site of the former parish church is adjacent to the village of Carrickmore. It is situated in the historic barony of Omagh East and the civil parish of Termonmaguirk. It had a population of 612 in the 2001 Census. In the 2011 Census 2,330 people lived in the Termon Ward, which covers the Carrickmore and Creggan areas.

The current settlement can trace its origins back thousands of years to the pre-Christian era. The area is steeped in history and legend, many tales connected with Saint Colmcille and the village, including the saint's well, chair and bed which are still in existence. A wide range of historic monuments can be found in the Carrickmore area, including cairns, stone circles, standing stones and raths..

The Dean Brian Maguirc College, a second-level education school, is named for Dean Brian McGurk who was Vicar-General to St Oliver Plunkett during the Penal Times and died in Armagh Gaol, aged 91.

Carrickmore holds the annual Tyrone County Commemoration of the 1916 Easter Rising and a remembrance ceremony for all republicans killed in The Troubles since 1969.

Carrickmore is the ancestral home of Kurt Cobain, lead singer and guitarist of the band Nirvana. Samuel and Letitia Cobain left the townland of Inishatieve for America in the 1800s first moving to Canada and then settling in Washington. Kurt Cobain was a fifth generation descendant from the emigrants.

Carrickmore is served by Ulsterbus route 86, which runs between Dungannon and Omagh via Dungannon, Donaghmore, Pomeroy, Carrickmore, Drumnakilly and Omagh.

The Portadown, Dungannon and Omagh Junction Railway opened Carrickmore railway station on 2 September 1861. The Ulster Transport Authority closed the station on 5 October 1959 and the line on 15 February 1965.

The townlands that make up the area of Carrickmore border on the parishes of Ballygawley, Beragh, Galbally, Kildress, Kileeshil, Pomeroy. Carrickmore also shares the parish of Termonmagurk with Loughmacrory and Creggan. Carrickmore has the smallest townland in Ireland known as Old Church Yard.

Carrickmore St. Colmcille's, Gaelic Football club and Éire Óg Hurling and Camogie Club are the two main sporting organization's in the village. Carrickmore also has a proud tradition of boxing in the area and has had many All Ireland Champions. There are also local walking, running, cycling and Special needs sporting clubs.

Main areas of employment are engineering, construction, quarrying, I.T. and farming. The larger surrounding towns of Cookstown, Dungannon and Omagh also provide other forms of employment.

Carrickmore is classified as a town by the NI Statistics and Research Agency (NISRA) (i.e. with a population between 500 and 1,000). On Census day 2011:

The townland of Carrickmore is situated in the historic barony of Omagh East and the civil parish of Termonmaguirk and covers an area of 915 acres.

All content from Kiddle encyclopedia articles (including the article images and facts) can be freely used under Attribution-ShareAlike license, unless stated otherwise. Cite this article:
Carrickmore Facts for Kids. Kiddle Encyclopedia.