Kurt Donald Cobain (February 20, 1967 - c. April 5, 1994) was an American musician. He was the lead singer and guitarist of the grunge band Nirvana, which also included bassist Krist Novoselic and drummer Dave Grohl.

He is remembered as one of the most iconic and influential rock musicians in the history of alternative music. 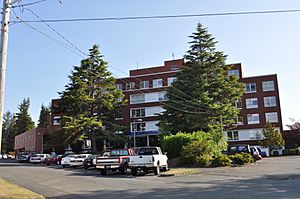 Grays Harbor Hospital in Aberdeen, where Cobain was born

Cobain was born in the city of Aberdeen, Washington. His parents divorced when he was seven years old. He later said that the divorce had a profound effect on his life, while his mother noted that his personality changed dramatically; Cobain became defiant and withdrawn.

During his sophomore year in high school, Cobain began living with his mother in Aberdeen. In late 1986 Cobain moved into an apartment. At this time he often travelled to Olympia to go to rock concerts.

Cobain began developing an interest in music at a young age. According to his Aunt, he began singing at the age of two. At age four, he started playing the piano and singing, writing a song about a trip to a local park.

He listened to artists like the Ramones and Electric Light Orchestra (ELO) and, from a young age, would sing songs like Arlo Guthrie's "Motorcycle Song", The Beatles' "Hey Jude", Terry Jacks "Seasons in the Sun", and the theme song to the television show of the band The Monkees. 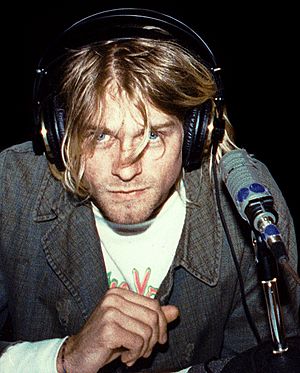 Cobain was very influential in creating what came to be known as grunge music. Grunge musicians pushed back against music they saw commercial and shallow. Grunge was a reaction against 1980s stadium rock and metal bands that were more concerned with appearance than sound.

Cobain played left-handed, despite being forced to write right-handed. 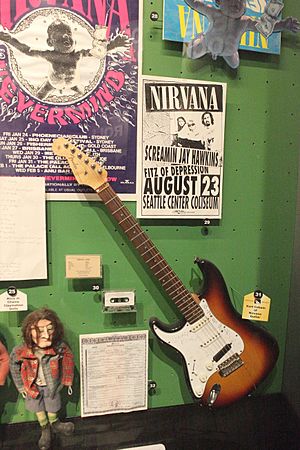 Kurt Cobain started Nirvana with his friend Krist Novoselic in 1987. They often would practice on the second floor of Novescelic's Mom's hair salon.

Nirvana's first album, Bleach, was released in 1989. they went through five different drummers and finally they decided to hire Dave Grohl from the band Scream in 1990.

After the 1991 release of their hit album Nevermind, Nirvana became one of the most popular bands of that time. Nirvana's best known song is "Smells Like Teen Spirit", which was often referred to by the media as an anthem for Generation X and grunge itself.

Often Cobain expressed frustration with his fame, because he thought they where getting the wrong side of him.

They went on to release one more album, In Utero. it wasn't as famous as Nevermind, but it was still very successful. Cobain said that this album was the one he was looking for, the sound he had in his head for their last two albums. He decided that he wanted to have a more mellow sound.

The band broke up after Cobain died in 1994. 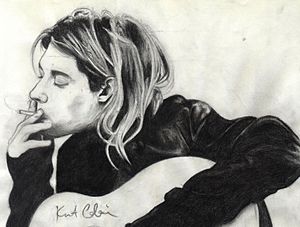 Self portrait by Kurt Cobain

Cobain met Courtney Love in 1990. On February 24, 1992, a few days after the conclusion of Nirvana's "Pacific Rim" tour, Cobain and Love were married on Waikiki Beach in Hawaii. Love wore a satin and lace dress once owned by Frances Farmer, and Cobain wore green pajamas, because he had been "too lazy to put on a tux." Eight people were in attendance at the ceremony, including Grohl. Love was pregnant at the time with their daughter Frances Bean Cobain who was born August 18, 1992.

In 2002, some of Cobain's private journal entries were published in a book called Journals.

All content from Kiddle encyclopedia articles (including the article images and facts) can be freely used under Attribution-ShareAlike license, unless stated otherwise. Cite this article:
Kurt Cobain Facts for Kids. Kiddle Encyclopedia.