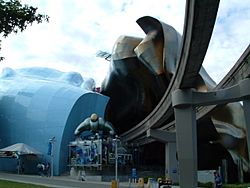 The Museum of Pop Culture or MoPOP is a nonprofit museum in Seattle, Washington, dedicated to contemporary popular culture. It was founded by Microsoft co-founder Paul Allen in 2000 as the Experience Music Project. Since then MoPOP has organized dozens of exhibits, 17 of which have toured across the U.S. and internationally.

The museum—formerly known as Experience Music Project and Science Fiction Museum and Hall of Fame (EMP|SFM) and later EMP Museum until November 2016—has initiated many public programs including "Sound Off!", an annual 21-and-under battle-of-the-bands that supports the all-ages scene; and "Pop Conference," an annual gathering of academics, critics, musicians, and music buffs.

MoPOP, in collaboration with the Seattle International Film Festival (SIFF), presents the Science Fiction and Fantasy Short Film Festival which takes place every winter at Seattle Cinerama Theater. Since 2007, the MoPop celebrates recording artists with the Founders Award for their noteworthy contributions. 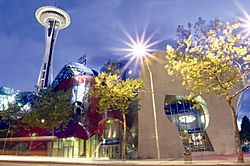 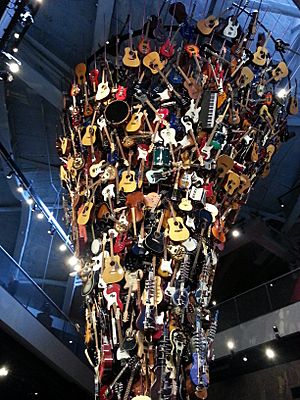 MoPOP is home to numerous exhibits and interactive activity stations as well as sound sculpture and various educational resources:

MoPOP was also the location of the first NIME workshop's concert and demo program. This subsequently became the annual International Conference on New Interfaces for Musical Expression, a leading venue for cutting-edge research on music technology.

The Science Fiction Museum and Hall of Fame was founded by Paul Allen and his sister Jody Patton, and opened to the public on June 18, 2004. It incorporated the Science Fiction and Fantasy Hall of Fame which had been established in 1996. The museum was divided into several galleries with themes such as "Homeworld", "Fantastic Voyages", "Brave New Worlds", and "Them!", each displaying related memorabilia (movie props, first editions, costumes, and models) in large display cases, posters, and interactive displays. It was said about the museum that "From robots to jet packs to space suits and ray guns, it's all here."

Members of the museum's advisory board included Steven Spielberg, Ray Bradbury, James Cameron, and George Lucas. Among its collection of artifacts were Captain Kirk's command chair from Star Trek, the B9 robot from Lost in Space, the Death Star model from Star Wars, the T-800 Terminator and the dome from the film Silent Running. Although the Science Fiction Museum as a permanent collection was de-installed in March 2011, a new exhibit named Icons of Science Fiction opened as a replacement in June 2012. At this time the new Hall of Fame display was unveiled and the class of 2012 inducted.

The Science Fiction and Fantasy Hall of Fame was founded in 1996 by the Kansas City Science Fiction and Fantasy Society and the Center for the Study of Science Fiction (CSSF) at the University of Kansas (KU). The chairmen were Keith Stokes (1996–2001) and Robin Wayne Bailey (2002–2004). Only writers and editors were eligible for recognition and four were inducted annually, two deceased and two living. Each class of four was announced at Kansas City's annual science fiction convention, ConQuesT, and inducted at the Campbell Conference hosted by CSSF.

The Hall of Fame stopped inducting fantasy writers after 2004, when it became part of the Science Fiction Museum affiliated with the Museum of Pop Culture, under the name "Science Fiction Hall of Fame". Having inducted 36 writers in nine years, the organization began to recognize non-literary media in 2005. It retained the quota of four new members and thus reduced the annual number of writers. The 2005 and 2006 press releases placed new members in "Literature", "Art", "Film, Television and Media", and "Open" categories, one for each category. In 2007 and 2008, the fourth inductee was placed in one of the three substantial categories.

MoPOP de-installed the Science Fiction Museum in March 2011. When the "Icons of Science Fiction" exhibition opened in June 2012, a new Hall of Fame display was unveiled and the class of 2012 was inducted.

Nominations are submitted by the public,

MoPOP restored the original name online during June 2013 and announced five new members, one daily, beginning 17 June 2013. The first four were cited largely or wholly for science fiction works, however the final one was J.R.R. Tolkien, who was "hailed as the father of modern fantasy literature".

In 2016, the Hall of Fame's 20th anniversary year, the scope was changed again to include not only creators, but creations (from such genres as Cinema, Television and Games), with two examples of each being honoured. A total of 20 additional inductees in both categories were also announced. The class of 2017 brought the number of members to 92, plus 20 added in 2016 to celebrate the Hall of Fame's anniversary.

Twenty other creators and works were inducted into the Hall of Fame to celebrate its 20th anniversary:

In November 2016 EMP Museum announced it would be rebranding itself as the Museum of Pop Culture, or MoPOP for short. 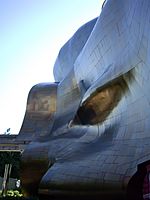 An exterior view of the building

MoPOP is located on the campus of Seattle Center, adjacent to the Space Needle and the Seattle Center Monorail, which runs through the building. The structure itself was designed by Frank Gehry and resembles many of his firm's other works in its sheet-metal construction, such as Guggenheim Museum Bilbao, Walt Disney Concert Hall, and Gehry Tower. Much of the building material is exposed in the building's interior. The building contains 140,000 square feet (13,000 m2), with a 35,000-square-foot (3,300 m2) footprint. The name of the museum's central Sky Church pays homage to Jimi Hendrix. A concert venue capable of holding up to 800 guests, the last structural steel beam to be put in place bears the signatures of all construction workers who were on site on the day it was erected. Hoffman Construction Company of Portland, Oregon, was the general contractor, while Magnusson Klemencic Associates of Seattle were the structural engineers for the project. 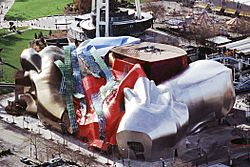 Even before groundbreaking, the Seattle Weekly said the design could refer to "the often quoted comparison to a smashed electric guitar." Gehry himself had in fact made the comparison: "We started collecting pictures of Stratocasters, bringing in guitar bodies, drawing on those shapes in developing our ideas." The architecture was greeted by Seattle residents with a mixture of acclaim for Gehry and derision for this particular edifice. British-born, Seattle-based writer Jonathan Raban remarked that "Frank Gehry has created some wonderful buildings, like the Guggenheim Museum in Bilbao, but his Seattle effort, the Experience Music Project, is not one of them." New York Times architecture critic Herbert Muschamp described it </ref>

The museum has had mixed financial success. In an effort to raise more funds, museum organizers used Allen's extensive art collection to create a 2006 exhibit at the museum entitled DoubleTake: From Monet to Lichtenstein. The exhibit included Roy Lichtenstein's The Kiss (1962), Pierre-Auguste Renoir's The Reader (1877), Vincent van Gogh's Orchard with Peach Trees in Blossom (1888), Pablo Picasso's Four Bathers (1921) and several works of art from Claude Monet including one of the Water Lilies paintings (1919) and The Mula Palace (1908). Since then the museum has organized numerous exhibitions focused more specifically on popular culture, such as Sound and Vision: Artists Tell Their Stories, which opened February 28, 2007. This brought together both music and science fiction in a single exhibit, and drew on the museum's extensive collection of oral history recordings. The museum's recent exhibitions have ranged from horror cinema, video games, and black leather jackets to fantasy film and literature.

Since 2007, the Museum of Pop Culture's Founders Award has celebrated artists whose "noteworthy contributions continue to nurture the next generation of risk-takers". The annual benefit gala is key in funding the museum's educational programs, community engagement, and exhibitions. In 2020, due to the COVID-19 pandemic, the gala had to be cancelled and for the first time ever, the event was made free to the public, streaming online on December 1, 2020, as MoPOP honored Seattle's own Alice in Chains. The benefit streaming raised more than $600,000 for MoPOP in its first night. A compilation featuring highlights from the tribute was made available for streaming on Amazon Music.

All content from Kiddle encyclopedia articles (including the article images and facts) can be freely used under Attribution-ShareAlike license, unless stated otherwise. Cite this article:
Museum of Pop Culture Facts for Kids. Kiddle Encyclopedia.