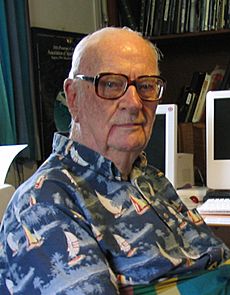 Sir Arthur Charles Clarke (Minehead, Somerset, 6 December 1917 – Colombo, Sri Lanka, 19 March 2008) was a British author and inventor. He was most famous for his science fiction novel 2001: A Space Odyssey, and for working with director Stanley Kubrick on the movie of the same name. Clarke and Isaac Asimov were probably the two best-known science fiction writers of their day.

Some of Clarke's novels include Childhood's End, A Fall of Moondust, The Songs of Distant Earth, The Sands of Mars, and Meeting with Medusa. He also wrote many short stories, and several serious works on science.

Clarke served in the Royal Air Force as a radar instructor and technician from 1941–1946. He proposed a satellite communication system in 1945 which won him the Franklin Institute Gold Medal in 1963.

Clarke emigrated to Sri Lanka in 1956 largely to pursue his interest in scuba diving; That year, he discovered the underwater ruins of the ancient Koneswaram temple in Trincomalee. He lived in Sri Lanka until his death. He was knighted by Queen Elizabeth II in 1998, and was awarded Sri Lanka's highest civil honour, Sri Lankabhimanya, in 2005.

Clarke died from heart and respiratory failure at the age of 90.

All content from Kiddle encyclopedia articles (including the article images and facts) can be freely used under Attribution-ShareAlike license, unless stated otherwise. Cite this article:
Arthur C. Clarke Facts for Kids. Kiddle Encyclopedia.