Kids Encyclopedia Facts
Not to be confused with the centaur 2060 Chiron.
This page is about the satellite of Pluto. For other uses, see Charon. 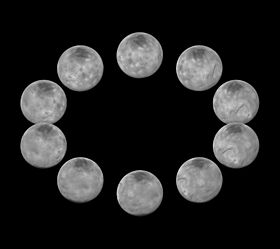 Mosaic of best-resolution images of Charon from different angles

Charon, also known as (134340) Pluto I, is the largest of the five known natural satellites of the dwarf planet Pluto. It was discovered in 1978 at the United States Naval Observatory in Washington, D.C., using photographic plates taken at the United States Naval Observatory Flagstaff Station (NOFS). With half the diameter and one eighth the mass of Pluto, it is a very large moon in comparison to its parent body. Its gravitational influence is such that the barycenter of the Pluto–Charon system lies outside Pluto. In September 2016, astronomers announced that the reddish-brown cap of the north pole of Charon is composed of tholins, organic macromolecules that may be essential ingredients of life, and produced from methane, nitrogen and related gases released from the atmosphere of Pluto and transferred over about 19,000 km (12,000 mi) distance to the orbiting moon. The New Horizons spacecraft is the only probe that has visited the Pluto system. It approached Charon to within 27,000 km (17,000 mi). 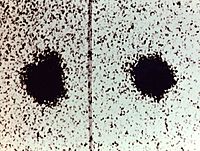 Charon's discovery at the Naval Observatory Flagstaff Station as a time-varying bulge on the image of Pluto (seen near the top at left, but absent on the right). Negative image.

Charon was discovered by United States Naval Observatory astronomer James Christy, using the 1.55-meter telescope at NOFS, and was formally announced to the world via the International Astronomical Union on July 7, 1978 On June 22, 1978, he had been examining highly magnified images of Pluto on photographic plates taken at the 1.55-meter (61 in) Flagstaff telescope two months prior. Christy noticed that a slight elongation appeared periodically. Later, the bulge was confirmed on plates dating back to April 29, 1965.

Subsequent observations of Pluto determined that the bulge was due to a smaller accompanying body. The periodicity of the bulge corresponded to Pluto's rotation period, which was previously known from Pluto's light curve. This indicated a synchronous orbit, which strongly suggested that the bulge effect was real and not spurious. This resulted in reassessments of Pluto's size, mass, and other physical characteristics, because the calculated mass and albedo of the Pluto–Charon system had previously been attributed to Pluto alone.

Doubts about Charon's existence were erased when it and Pluto entered a five-year period of mutual eclipses and transits between 1985 and 1990. This occurs when the Pluto–Charon orbital plane is edge-on as seen from Earth, which only happens at two intervals in Pluto's 248-year orbital period. It was fortuitous that one of these intervals happened to occur soon after Charon's discovery.

Charon was originally known by the temporary designation S/1978 P 1, according to the then recently instituted convention. On June 24, 1978, Christy first suggested the name Charon as a scientific-sounding version of his wife Charlene's nickname, "Char". Although colleagues at the Naval Observatory proposed Persephone, Christy stuck with Charon after discovering it coincidentally refers to a Greek mythological figure: Charon ( or Greek Χάρων) is the ferryman of the dead, closely associated in myth with the god Hades, whom the Romans identified with their god Pluto. The IAU officially adopted the name in late 1985 and it was announced on January 3, 1986.

Simulation work published in 2005 by Robin Canup suggested that Charon could have been formed by a collision around 4.5 billion years ago, much like Earth and the Moon. In this model, a large Kuiper belt object struck Pluto at high velocity, destroying itself and blasting off much of Pluto's outer mantle, and Charon coalesced from the debris. However, such an impact should result in an icier Charon and rockier Pluto than scientists have found. It is now thought that Pluto and Charon might have been two bodies that collided before going into orbit about each other. The collision would have been violent enough to boil off volatile ices like methane (CH4) but not violent enough to have destroyed either body. The very similar density of Pluto and Charon implies that the parent bodies were not fully differentiated when the impact occurred.

An oblique view of the Pluto–Charon system showing that Pluto orbits a point outside itself. Also visible is the mutual tidal locking between the two bodies.

Charon and Pluto orbit each other every 6.387 days. The two objects are gravitationally locked to one another, so each keeps the same face towards the other. This is a case of mutual tidal locking, as compared to that of the Earth and the Moon, where the Moon always shows the same face to Earth, but not vice versa. The average distance between Charon and Pluto is 19,570 kilometres (12,160 mi). The discovery of Charon allowed astronomers to calculate accurately the mass of the Plutonian system, and mutual occultations revealed their sizes. However, neither indicated the two bodies' individual masses, which could only be estimated, until the discovery of Pluto's outer moons in late 2005. Details in the orbits of the outer moons reveal that Charon has approximately 12.18% of the mass of Pluto. This shows it to have a density of 1.702 ± 0.021 g/cm3, suggesting a composition of 55 ± 5% rock to 45% ice, whereas Pluto is somewhat denser and about 70% rock. 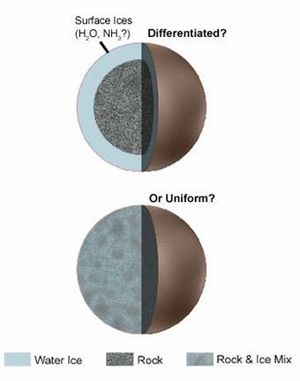 Charon's diameter is 1,212 kilometres (753 mi), just over half that of Pluto, and larger than the dwarf planet Ceres, and the twelfth largest natural satellite in the solar system. Charon is sufficiently massive to have collapsed into a spheroid under its own gravity. Charon's slow rotation means that there is almost no flattening. Its equatorial and polar radii differ by less than 1%

Charon's volume and mass allow calculation of its density, 7003170200000000000♠1.702±0.021 g/cm3, from which it can be determined that Charon is slightly less dense than Pluto and thus contains a larger proportion of ice relative to rock in its interior. The difference is considerably lower than that of most suspected collisional satellites. Before New Horizons' flyby, there were two conflicting theories about Charon's internal structure: some scientists thought Charon to be a differentiated body like Pluto, with a rocky core and an icy mantle, whereas others thought it would be uniform throughout. Evidence in support of the former position was found in 2007, when observations by the Gemini Observatory of patches of ammonia hydrates and water crystals on the surface of Charon suggested the presence of active cryogeysers. The fact that the ice was still in crystalline form suggested it had been deposited recently, because solar radiation would have degraded it to an amorphous state after roughly thirty thousand years. 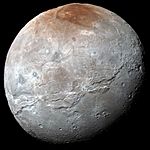 Charon in enhanced color to bring out differences in surface composition.

Unlike Pluto's surface, which is composed of nitrogen and methane ices, Charon's surface appears to be dominated by the less volatile water ice. In 2007, observations by the Gemini Observatory of patches of ammonia hydrates and water crystals on the surface of Charon suggested the presence of active cryogeysers and cryovolcanoes.

Mountain in a moat

In a released photo by New Horizons, an unusual surface feature has captivated and baffled the scientist team of the mission. The image reveals a mountain rising out of a depression, in a zoomed in view. It's "a large mountain sitting in a moat", said Jeff Moore, of NASA’s Ames Research Center, in a statement. "This is a feature that has geologists stunned and stumped", he added. New Horizons captured the photo from a distance of 49,000 miles (79,000 km).

Since the first blurred images of the moon (1), images showing Pluto and Charon resolved into separate disks were taken for the first time by the Hubble Space Telescope in the 1990s (2). The telescope was responsible for the best, yet low quality images of the moon. In 1994, the clearest picture of the Pluto-Charon system showed two distinct and well defined circles (3). The image was taken by Hubble's Faint Object Camera (FOC) when the system was 2.6 billion miles (4.4 billion kilometers) away from Earth Later, the development of adaptive optics made it possible to resolve Pluto and Charon into separate disks using ground-based telescopes. 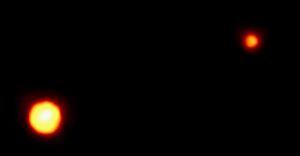 1996 image of Pluto (left) and Charon (right) from the ESA/Dornier Faint Object Camera on the NASA Hubble Space Telescope.

All content from Kiddle encyclopedia articles (including the article images and facts) can be freely used under Attribution-ShareAlike license, unless stated otherwise. Cite this article:
Charon (moon) Facts for Kids. Kiddle Encyclopedia.