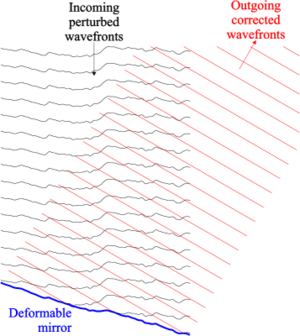 A deformable mirror can be used to correct wavefront errors in an astronomical telescope.

Adaptive optical works by measuring the distortion and rapidly compensating for it either using deformable mirrors or material with variable refractive properties. While the technique was theoretically understood for some time, it was only advances in computer technology during the 1990s that finally made the technique practical.

All content from Kiddle encyclopedia articles (including the article images and facts) can be freely used under Attribution-ShareAlike license, unless stated otherwise. Cite this article:
Adaptive optics Facts for Kids. Kiddle Encyclopedia.