Moons of Pluto facts for kids 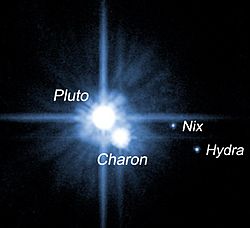 Image taken from the Hubble Telescope showing Pluto and its three largest moons. 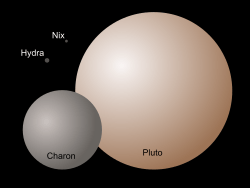 Similar sizes of the Objects in the Plutonian system.

The first and largest moon discovered orbiting around Pluto was Charon, Charon was discovered on June 22 1978 by James Christy. In May 2005, the Hubble Space Telescope discovered two smaller moons which were named Nix and Hydra. Two even smaller moons named Kerberos and Styx were discovered in 2011 and 2012.

All content from Kiddle encyclopedia articles (including the article images and facts) can be freely used under Attribution-ShareAlike license, unless stated otherwise. Cite this article:
Moons of Pluto Facts for Kids. Kiddle Encyclopedia.