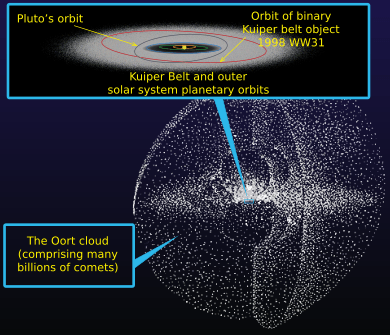 The Kuiper belt, occasionally called the Edgeworth–Kuiper belt, is a circumstellar disc in the outer Solar System, extending from the orbit of Neptune to the Sun. It is similar to the asteroid belt, but is far larger—20 times as wide and 20 to 200 times as massive. Like the asteroid belt, it consists mainly of small bodies or remnants from when the Solar System formed.

While many asteroids are composed primarily of rock and metal, most Kuiper belt objects are composed largely of frozen volatiles (termed "ices"), such as methane, ammonia and water.

The Kuiper belt is home to three officially recognized dwarf planets: Pluto, Haumea and Makemake. Some of the Solar System's moons, such as Neptune's Triton and Saturn's Phoebe, may have originated in the region.

The Kuiper belt was named after Dutch-American astronomer Gerard Kuiper, though he did not predict its existence. In 1992, Albion was discovered, the first Kuiper belt object (KBO) since Pluto and Charon. Since its discovery, the number of known KBOs has increased to thousands, and more than 100,000 KBOs over 100 km (62 mi) in diameter are thought to exist.

All content from Kiddle encyclopedia articles (including the article images and facts) can be freely used under Attribution-ShareAlike license, unless stated otherwise. Cite this article:
Kuiper belt Facts for Kids. Kiddle Encyclopedia.