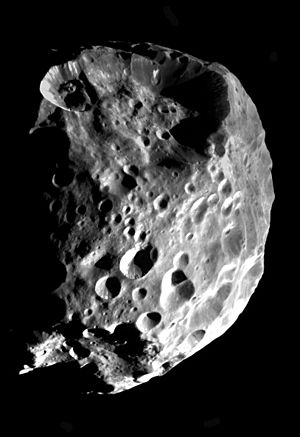 A picture of the surface of Phoebe

Phoebe is a moon which goes around (orbits) the planet called Saturn. It takes eighteen months for Phoebe to go all the way around Saturn. It is half made out of rock, and half made out of ice. The ground on Phoebe is black, which means that it is very dark when seen from Earth. Phoebe does not have any air, and there is no water on its surface.

There are many craters on Phoebe. These are from asteroids and other things crashing into it, and leaving round marks on the surface.

Phoebe is slightly irregular, which means that it is not perfectly round like a ball. It has an average diameter of 213 km. This means that the Earth's moon is 15 times bigger than Phoebe. The duration between two sunrises (rotation period) is only 9 hours and 16.5 minutes long.

All content from Kiddle encyclopedia articles (including the article images and facts) can be freely used under Attribution-ShareAlike license, unless stated otherwise. Cite this article:
Phoebe (moon) Facts for Kids. Kiddle Encyclopedia.