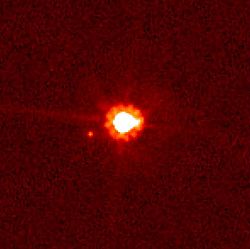 Eris, the biggest minor planet in the scattered disc

The scattered disk is still not understood well. Astronomers believe that it was created when objects in the Kuiper belt were "scattered" by the gravity of the outer planets, mainly Neptune. Unlike most objects in the Solar System which move in a round and flat path, scattered disc objects go every which way. Different SDOs have different orbital eccentricity and orbital inclination.

All content from Kiddle encyclopedia articles (including the article images and facts) can be freely used under Attribution-ShareAlike license, unless stated otherwise. Cite this article:
Scattered disc Facts for Kids. Kiddle Encyclopedia.