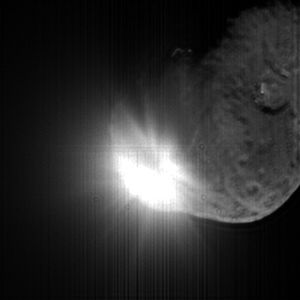 Tempel 1 is a comet which orbits the sun every 5.5 years. It was discovered in 1867 by the astronomer Ernest Tempel. On July 4, 2005, NASA fired a spacecraft from Deep Impact into its surface creating a spectacular explosion. Scientists were able to study the debris from the explosion to discover what the comet was made from. They discovered that part of the comet was covered in water ice which made it like a 7 acres (3 ha) skating rink. This was the first time that evidence of water had been found on a comet.

All content from Kiddle encyclopedia articles (including the article images and facts) can be freely used under Attribution-ShareAlike license, unless stated otherwise. Cite this article:
Tempel 1 Facts for Kids. Kiddle Encyclopedia.