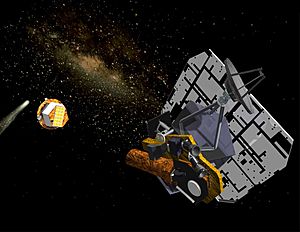 Drawing of Deep Impact after the impactor probe has been launched

Deep Impact was a NASA space mission to study comets. It was sent out to meet Comet Tempel 1, and to crash a smaller space rocket deep into the comet's surface.

Deep Impact was launched on January 12, 2005 from the Cape Canaveral Air Force Station at Cape Canaveral, Florida. The rocket used was Delta II. It reached the comet in July 2005, 134,000,000 kilometres (83,000,000 miles) from Earth. After taking photos, the 370 kilograms (820 pounds) impactor spacecraft was sent to crash into the surface on July 4, 2005. This created a huge crater and blasted parts of the comet into space. Deep Impact was able to study this debris which included ice and dust from deep inside the comet. This has helped scientists understand what comets are made of.

From the explosion scientists discovered that the comet had water ice both on the surface and deep inside. One scientist described it as being like a "...skating rink of snowy dirt." They were able to work out the comet was formed in the area between Uranus and Neptune.

After the mission, NASA decided to send Deep Impact to study the Comet 85P/Boethin. However the comet did not return on its expected 11 year path around the sun, and has not been seen since.

All content from Kiddle encyclopedia articles (including the article images and facts) can be freely used under Attribution-ShareAlike license, unless stated otherwise. Cite this article:
Deep Impact (space mission) Facts for Kids. Kiddle Encyclopedia.