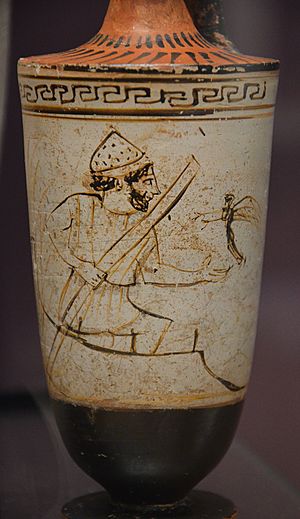 Attic red-figure lekythos attributed to the Tymbos painter showing Charon welcoming a soul into his boat, c. 500-450 BC

In Greek mythology, Charon or Kharon ( or Greek Χάρων) is the ferryman of Hades who carries souls of the newly deceased across the rivers Styx and Acheron that divided the world of the living from the world of the dead. A coin to pay Charon for passage, usually an obolus or danake, was sometimes placed in or on the mouth of a dead person. Some authors say that those who could not pay the fee, or those whose bodies were left unburied, had to wander the shores for one hundred years. In the catabasis mytheme, heroes – such as Aeneas, Dionysus, Heracles, Hermes, Odysseus, Orpheus, Pirithous, Psyche, Theseus and Sisyphus – journey to the underworld and return, still alive, conveyed by the boat of Charon.

Charon is the son of Erebus. He was also the brother of, among many others, Thanatos and Hypnos. 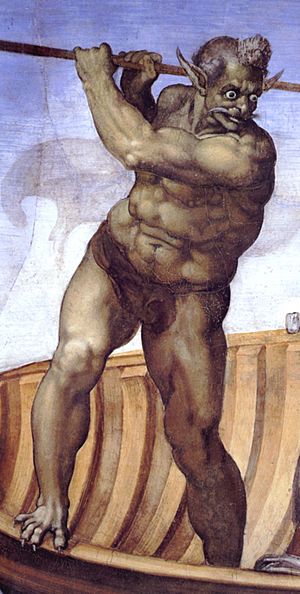 Charon is depicted frequently in the art of ancient Greece. Attic funerary vases of the 5th and 4th centuries BC are often decorated with scenes of the dead boarding Charon’s boat. On the earlier such vases, he looks like a rough, unkempt Athenian seaman dressed in reddish-brown, holding his ferryman's pole in his right hand and using his left hand to receive the deceased. Hermes sometimes stands by in his role as psychopomp. On later vases, Charon is given a more "kindly and refined" demeanor.

The largest moon of the planet Pluto is named Charon after this mythological person.

All content from Kiddle encyclopedia articles (including the article images and facts) can be freely used under Attribution-ShareAlike license, unless stated otherwise. Cite this article:
Charon (mythology) Facts for Kids. Kiddle Encyclopedia.