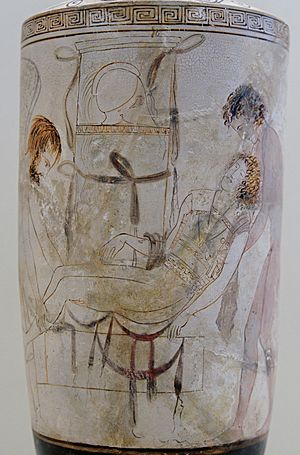 Hypnos and Thanathos on a Greek vase

Hypnos is the god of sleep in Greek mythology. He is the son of Nyx and the twin brother of Thanatos, the god of death.

His sons are the Oneroi: Morpheus, Phobetor and Phantasos.

His Roman equivalent was Somnus. Hypnos was represented as a gentle young man, usually with wings attached to his temples or shoulders (even though he tended to kill Roman workers that dozed off during their jobs).

All content from Kiddle encyclopedia articles (including the article images and facts) can be freely used under Attribution-ShareAlike license, unless stated otherwise. Cite this article:
Hypnos Facts for Kids. Kiddle Encyclopedia.