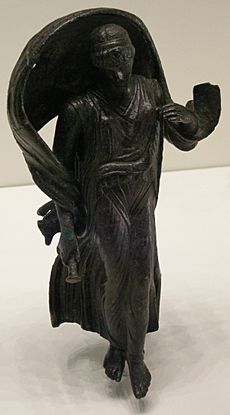 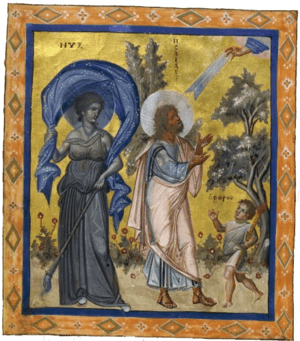 Nyx, as represented in the 10th-century Paris Psalter at the side of the Prophet Isaiah

Nyx was the goddess of the night in Greek mythology. She came out of Chaos.

Her Roman equivalent was Nox.

Nyx could not die. This is because she was sent to Earth by the Greek Gods and Goddesses.

In his theogony (How the gods came to be), Hesiod tells: Night is born of Chaos; her offspring are many, and telling. With Erebus, Night gives birth to the following deities:

Later, on her own, Night gives birth to

In his description of Tartarus, Hesiod says further that Hemera "day", who is now Night's sister rather than daughter, left Tartarus just as Nyx entered it; when Hemera returned, Nyx left. This mirrors the portrayal of Ratri "night" in the Rig-Veda, where she works in close cooperation but also tension with her sister Ushas "dawn".

Nyx had other children on her own. These were:

All content from Kiddle encyclopedia articles (including the article images and facts) can be freely used under Attribution-ShareAlike license, unless stated otherwise. Cite this article:
Nyx Facts for Kids. Kiddle Encyclopedia.