Kids Encyclopedia Facts
This page is about a Greek goddess. For the dwarf planet, see Eris (dwarf planet). 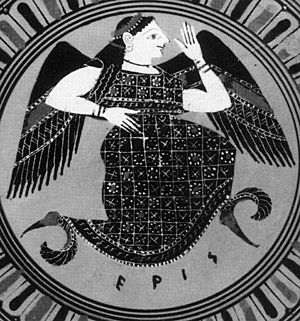 The Romans called her Discordia. In Roman statues of Discordia, and in other Roman art of her, she looks scary and ugly, and she is holding a knife. There are a few myths about this goddess, such as the one involving the golden apple.

Nowadays, there are some people who call themselves Discordians. This idea comes from a book called Principia Discordia, which was written by Greg Hill and Kerry Thornley in San Francisco in the year 1958 or 1959. The book says that Eris might not have been scary and ugly after all, but that she was just misunderstood.

The Principia Discordia describes the Discordian Society and its Goddess Eris, as well as the basics of Discordianism.

All content from Kiddle encyclopedia articles (including the article images and facts) can be freely used under Attribution-ShareAlike license, unless stated otherwise. Cite this article:
Eris Facts for Kids. Kiddle Encyclopedia.