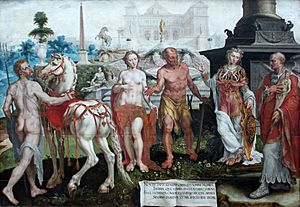 Momus is the god of blame in Greek mythology. His mother is Nyx, but he has no father. He was kicked out of Olympus after criticizing Zeus and Aphrodite.

All content from Kiddle encyclopedia articles (including the article images and facts) can be freely used under Attribution-ShareAlike license, unless stated otherwise. Cite this article:
Momus Facts for Kids. Kiddle Encyclopedia.