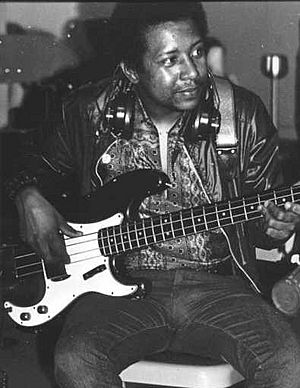 Billy Cox is a bassist, best known for playing with guitarist Jimi Hendrix. He was born in West Virginia.

Billy first met Hendrix in the early part of the 1960s, when they were both in the United States Army. Cox played with Hendrix in an R&B band called the King Kasuals. The two played at clubs in Nashville, Tennessee. While in England, Hendrix asked Cox to join him in a new band; Cox said no. The spot instead went to Noel Redding.

They met again in 1969, when Hendrix asked on Cox to play bass in the experimental band "Band of Gypsys".

All content from Kiddle encyclopedia articles (including the article images and facts) can be freely used under Attribution-ShareAlike license, unless stated otherwise. Cite this article:
Billy Cox Facts for Kids. Kiddle Encyclopedia.