Krist Anthony Novoselic (born May 16, 1965) is an American musician and political activist, best known as the bassist and a founding member of the grunge band Nirvana. Nirvana achieved massive success, earning multiple gold and platinum awards and touring around the world at sold-out shows.

After Nirvana disbanded following the death of its frontman Kurt Cobain in 1994, Novoselic formed Sweet 75 in 1995 and Eyes Adrift in 2002, releasing one album with each band. From 2006 to 2009, he played in the punk rock band Flipper, and in 2011, he contributed bass and accordion to the song "I Should Have Known" on the Foo Fighters' studio album Wasting Light, along with playing bass and accordion in his current band, Giants in the Trees, since June 2017.

Apart from his musical endeavours, Novoselic has been active politically, including the creation of a PAC named JAMPAC (Joint Artists and Musicians Political Action Committee). From 2007 through 2010, he wrote a weekly column on music and politics for the Seattle Weekly website.

On April 17, 2016, Novoselic performed with Paul McCartney in Seattle as part of the One on One tour during the encore.

Krist Anthony Novoselic was born in Compton, California, the son of Croatian immigrants Kristo and Marija Novoselić. Novoselic lived in Compton for one year before his parents moved to the ethnically Croatian Los Angeles neighborhood of San Pedro, where he remained for most of his childhood. He has a younger brother and sister. In 1971, his family relocated to Aberdeen, Washington due to rising real estate costs in California.

In 1975, his parents sent him to live with relatives in Durban, South Africa. He returned to Aberdeen in 1982. He is partially fluent in Croatian. His earliest memory of listening to music is listening to Chuck Berry with his father. Growing up, he had a severe underbite, for which he underwent corrective surgery.

Novoselic was already interested in bands such as Led Zeppelin, Black Sabbath, The Who, Van Halen, Devo, and Aerosmith. He also enjoyed listening to Yugoslavian bands. While in Yugoslavia, he picked up an interest in punk rock. He has cited Paul McCartney, Geezer Butler, John Entwistle, and Gene Simmons as the fundamental influences of his bass playing. 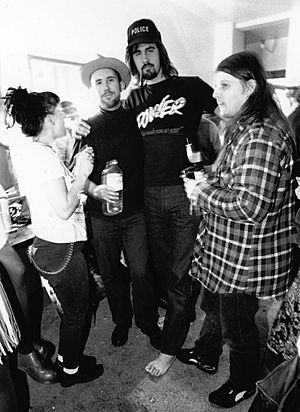 Krist Novoselic (third from left) at the Paramount Theater, Seattle 1991

Novoselic's brother Robert introduced him to his friend Kurt Cobain, who had noticed loud music coming from upstairs. Robert told Cobain that it was his older brother, who listened to punk rock. Cobain eventually befriended the older Novoselic, as the pair ended up sharing similar musical tastes, including a fondness for local band Melvins. The two had several mutual friends and began hanging out shortly thereafter.

Krist attended Aberdeen High School and Kurt attended Montesano High School (Washington). At one point, Cobain gave Novoselic a demo tape of his former band and asked him to form a band together. After several months, Novoselic finally listened to the tape, liked it, and agreed to start a band with Cobain. After high school, Novoselic worked as a painter and decorator. 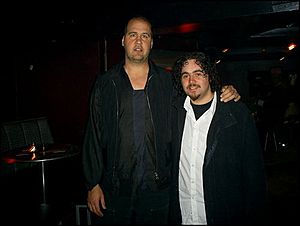 In 1989 Novoselic married Shelli Hyrkas, whom he had dated in high school. They divorced in 1999. In early 2004, he married American artist Darbury Ayn Stenderu; they have 2 children. They reside on a farm near Deep River, Washington, where they grow their own food. Novoselic stated, "I live out in the country now and it's quiet and it's a place where I can think a lot."

Novoselic is an FAA-licensed pilot, earning a single engine land rating after passing his flight test in April 2002. He went on to earn a multi-engine pilot certificate in February 2018. He has a strong interest in animals, geology, nature, and other sciences. He owns two cats named Einstein and Doris.

In 2016, Novoselic earned a BSc in social sciences from Washington State University.

All content from Kiddle encyclopedia articles (including the article images and facts) can be freely used under Attribution-ShareAlike license, unless stated otherwise. Cite this article:
Krist Novoselic Facts for Kids. Kiddle Encyclopedia.