Simmons was born as Chaim Witz on August 25, 1949, at Rambam Hospital, in Haifa, Israel, to Jewish emigrants from Hungary.

At age eight, he immigrated to the United States with his mother and settled in New York City. His father remained in Israel, where he had one other son and three daughters. In the United States, Simmons changed his name to Eugene Klein (later Gene Klein), adopting his mother's maiden name.

A significant influence on Simmons was the Beatles. 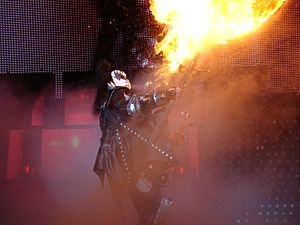 Although they began dating in 1983, they did not marry until 28 years later. Simmons often joked that he and Tweed were "happily unmarried" for over 20 years.

They have two children: a son, Nick (born January 22, 1989), and a daughter, Sophie (born July 7, 1992). He formerly had live-in relationships with Cher and Diana Ross, revealing that he fell in love with Ross while dating Cher.

Simmons can speak Hungarian, German, English, Hebrew and some Japanese.

All content from Kiddle encyclopedia articles (including the article images and facts) can be freely used under Attribution-ShareAlike license, unless stated otherwise. Cite this article:
Gene Simmons Facts for Kids. Kiddle Encyclopedia.