Coagh ( from Irish: Cuach, meaning "a round hill") is a small village in County Tyrone, Northern Ireland, situated five miles (8 km) east of Cookstown. Part of the village also extends into County Londonderry. It owes its existence to George Butle Conyngham of Springhill, and was founded in 1728 when King George II of Great Britain granted Conyngham a market charter allowing the village to host four fairs per year. It is situated within Mid-Ulster District.

The village nestles among gentle, low-lying land between the Sperrins and Lough Neagh. The main feature of the village is Hanover Square, which was named after the reigning Hanoverian George II by Conyngham. The village has been an ancient settlement for several thousand years; overlooking Coagh is Tamlaght Stone, a [Mesolithic]] dolmen erected c. 4500 BCE. 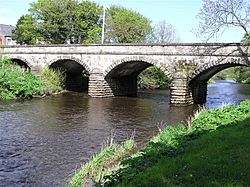 The bridge in Coagh which crosses the Ballinderry river; on the left is County Londonderry; on the right is County Tyrone

On 29 April 2001 the United Kingdom government had a census and found that there were 545 people living in Coagh. They also found that:

All content from Kiddle encyclopedia articles (including the article images and facts) can be freely used under Attribution-ShareAlike license, unless stated otherwise. Cite this article:
Coagh Facts for Kids. Kiddle Encyclopedia.