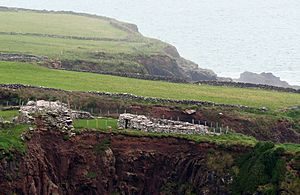 A promontory fort is usually located above a steep cliff, often only connected to the mainland by a small neck of land. Most seem to date to the Iron Age. They are mainly found in Brittany, Ireland, the Orkney Islands, the Isle of Man, Devon and Cornwall. 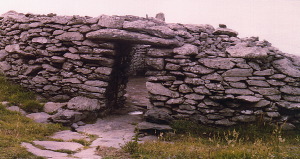 Only a few Irish promontory forts have been excavated and most date to the Iron Age, though some, like Dunbeg (County Kerry) might have originated in the Bronze Age. Others, like Dalkey Island (County Dublin) contain imported Eastern Mediterranean pottery and have been reoccupied and changed in the early medieval period.

On the Isle of Man promontory forts are found particularly on the rocky slate headlands of the south. Four out of more than 20 have been excavated and several, especially in Santon, can be visited using the Raad ny Foillan coastal footpath. All have a rampart on their vulnerable landward side, and excavations at Cronk ny Merriu have shown that access to the fort was via a strongly built gate.

The Scandinavians who arrived in the Isle of Man in the eighth and ninth centuries AD sometimes re-used these Iron Age promontory forts. 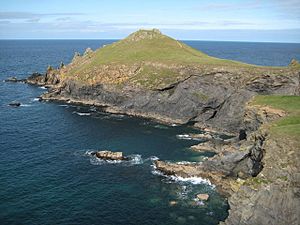 The Rumps in North Cornwall

Promontory forts can be found all along the coast of Penwith. Maen Castle, near to Land's End is one of the oldest, having been dated to around 500 BC. They are also found in other districts, e.g. The Rumps near Padstow and Dodman Point on the southern Cornish coast as well as Rame Head close to Plymouth. In Devon, Burgh Island and Bolt Tail are located on the south coast and Embury Beacon and Hillsborough on the north coast. The famous site at Tintagel may be a rare example of promontory fort whose occupation continued after the Romans and from there into later periods.

Caesar's de Bello Gallico describes the Veneti in southern Armorica – a powerful sea-faring people allied with the southern British during the war of 56 BC – as living in clifftop oppida. Their capital was Darioritum on the Morbihan bay, now modern Vannes/Gwened. The Veneti were linguistically British: they spoke Breton, which was derived from Cornish, and they once ruled Cornwall and Devon. They had close trade ties. When they were attacked by the Romans in Brittany, Julius Caesar reports that Cornwall sent them military aid.

All content from Kiddle encyclopedia articles (including the article images and facts) can be freely used under Attribution-ShareAlike license, unless stated otherwise. Cite this article:
Promontory fort Facts for Kids. Kiddle Encyclopedia.