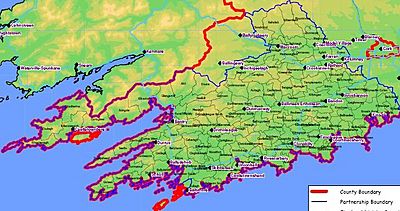 West Cork (Irish: Iarthar Chorcaí) is a cultural region in County Cork, Ireland. The main difference between it and the rest of Cork, is that the Gaelic culture and Irish language had a longer independent existence there than the much of the rest of the county. This was because the Norman FitzGerald family conquered what is today north and east Cork from the Gaelic Kingdom of Desmond starting in the 13th century, calling themselves "Earl of Desmond", while the Mac Cárthaigh and allied Gaelic families held out in the west until the 16th century and the Tudor period.

Traditionally a popular tourist destination, the area is seen as being distinct from the more populated northern or eastern parts of the county, as well as the more urban area of Metropolitan Cork. Those from this quite rural part of Ireland often describe themselves as being from West Cork. The area is famous for the rugged beauty of its peninsulas (such as the remote Beara Peninsula, Sheep's Head and Mizen Head peninsulas), popular beaches such as Inchydoney, Owenahincha and Barleycove, and picturesque towns and villages such as Skibbereen, Clonakilty, Kinsale and Rosscarbery.

Road signs may be found around Cork city and elsewhere directing traffic for "The West", or "West Cork". The town of Bandon is described as the "Gateway to West Cork". However, both Carrigaline and Macroom are also seen as key gateways to the region. The area of West Cork is not strictly defined, but at its broadest definition it includes all parts of County Cork south and west of the River Lee with the exception of Cork city and suburbs. 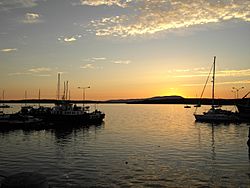 The area is notable for having been linked together by the Cork, Bandon and South Coast Railway, which began in Cork City, travelled across the county, with branches to Clonakilty (junction at Gaggin) and Skibbereen (junction at Drimoleague), before terminating at Bantry. The closure of the railway is still a grievance for many in the area. The narrow gauge Schull and Skibbereen Railway closed in 1947. Nowadays the main infrastructural backbone is provided by the N71 and R586 routes.

Other towns in West Cork include Bantry, Dunmanway, Skibbereen, Ballydehob, Castletownbere and Macroom (perhaps the most northern area described as West Cork).

All content from Kiddle encyclopedia articles (including the article images and facts) can be freely used under Attribution-ShareAlike license, unless stated otherwise. Cite this article:
West Cork Facts for Kids. Kiddle Encyclopedia.