Bere Island (Irish: Oiléan Béarra, meaning bear island, although officially called An tOileán Mór meaning "the big island") is an island off the Beara Peninsula in County Cork, Ireland. It is roughly 10 km x 3 km in dimension, with an area of 17.68 km², and, as of 2012, had a population of between 210 and 220 people.

Legend says that the island was named by a 2nd-century king of Munster, Mogh Nuadat, in honour of his wife, Beara, the daughter of Heber Mór, King of Castile.

Early traces of human occupation include megalithic tombs and standing stones. The island was the property of the O'Sullivan Bere clan and remained so until the power of the Gaelic chieftains was finally broken in 1602. This period also saw the first military interest in the island when Sir George Carew ordered a road to be built across the island to transport the pro-English forces to the Siege of Dunboy.

In December 1796, a French fleet entered Bantry Bay and Berehaven Harbour, led by General Hoche under the direction of Wolfe Tone, the leader of the United Irishmen. The French longboat which landed in Bere Island is now in the National Museum of Ireland. Adverse winds prevented the main force landing and eventually caused the fleet to disperse and return home. In August 1798, there was a further invasion attempt, at Killala in County Mayo, following the Irish Rebellion of that year. The result of these events was that the British authorities reviewed their defensive plans and in 1803, with the country once again at war with France, Lieutenant-Colonel William Twiss was sent to Ireland to draw up a plan of defence for the country. As part of this review he was directed to examine what security could be given to Bantry Bay.

Rear-Admiral Sir Robert Calder, who commanded the naval squadron based in Castletownbere Port wrote to the Rt. Hon. William Wickham on 22 December 1803 to request protection for his victualers and store ships, which were to be based at the Berehaven anchorage to supply his squadron. Wickham agreed that protection for the ships was necessary and instructed William Cathcart, 1st Earl Cathcart to order his engineers to carry out works to build Martello Towers on the island. The Bere Island towers were reported as ready on 2 February 1805 and were therefore probably among the earliest Martello Towers to be completed in Ireland. The four, all circular in shape and built of rubble masonry, were sited to defend the anchorage between the mainland and the small harbour of Lawrence Cove on Bere Island. In addition to the Martello Towers, a signal tower, a barracks for 2 officers and 150 men, a quay and storehouses were also constructed. After the end of the Napoleonic Wars there followed a period of military stagnation. This ended in 1898 when the British military raised a compulsory purchase order on large areas of the island in order to construct additional fortifications in order to protect the British Fleet at anchor in Berehaven Harbour.

During the Anglo-Irish War some Irish republicans were interned on Bere Island, including Canon William Kennedy, head (from 1919-1932) of St Flannan's College, Ennis. In 1922, under the terms of the Anglo-Irish Treaty that followed the Irish War of Independence, the British withdrew from most of Ireland but three deep water Treaty Ports, at Berehaven, Queenstown (renamed Cobh), and Lough Swilly, were retained as sovereign bases until 1938. 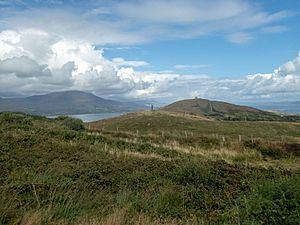 View across Bere Island, with standing stone and Martello tower in the distance

The wreckage of the Bardini Reefer lies just north of the island. It sank on the 12th of December 1982 after burning for several days 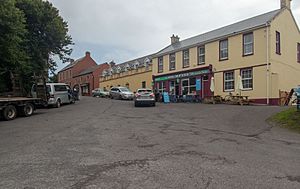 Rerrin is the main village centre on the island

The island is located between Berehaven Harbour and Bantry Bay in the western part of County Cork, about 1.5 km off the port of Castletownbere. It belongs to the civil parish of Killaconenagh (Cill Eacha Naoineach) in the barony of Bear. The highest point on the island is Knockanallig, at a height of 270 metres. The main harbour is Lawrence Cove, near the main village of Rerrin (Raerainn), toward the eastern end of the island. The church and its graveyard are located in Ballinakilla.

Ten of the 75 townlands of the civil parish of Killaconenagh are located on the island. These include Ardra West, Ardra East, Ballinakilla (with St Michael's Roman Catholic church and graveyard and nearby pub), Cloonaghlin West, Cloonaghlin Upper, Cloonaghlin Lower, Derrycreeveen, Greenane, Ardagh and Rerrin. 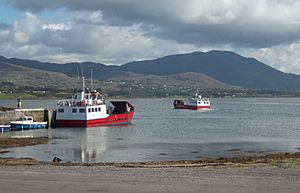 The island is served by two ferries both of which can carry light vehicles. One sails between Castletownbere and the west of the Island while the other serves Pontoon (a pier about 2km east of Castletownbere along the R572) and Rerrin village

During the COVID-19 pandemic in Ireland, in conjunction with other "isolation" efforts, the island's ferry services were curtailed, with only residents permitted to board in order to prevent the virus from reaching the island.

A local radio station broadcasts for a few hours on Sundays from a small transmitter on the island on 100.1MHz FM

All content from Kiddle encyclopedia articles (including the article images and facts) can be freely used under Attribution-ShareAlike license, unless stated otherwise. Cite this article:
Bere Island Facts for Kids. Kiddle Encyclopedia.