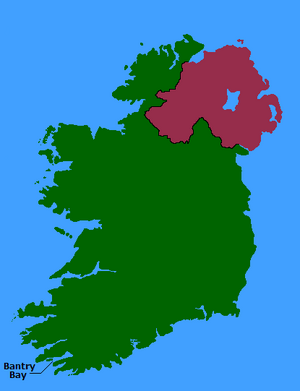 Location of Bantry Bay in Ireland

Bantry Bay (Irish: Cuan Baoi / Inbhear na mBárc / Bádh Bheanntraighe) is a bay located in County Cork, Ireland. The bay runs approximately 35 km (22 mi) from northeast to southwest into the Atlantic Ocean. It is approximately 3-to-4 km (1.8-to-2.5 miles) wide at the head and 10 km (6.2 mi) wide at the entrance.

Bantry Bay is a ria, a bay formed from a drowned river valley as a result of a relative rise in sea level. The bay is a deep (approx 40 metres in the middle) and large natural bay, with one of the longest inlets in southwest Ireland, bordered on the north by Beara Peninsula, which separates Bantry Bay from Kenmare Bay. The southern boundary is Sheep's Head Peninsula, separating Bantry Bay from Dunmanus Bay. The main islands in the bay are Bere Island and Whiddy Island. Bere Island is located near the entrance to the bay. On the north side of the island is Berehaven Harbour and Castletown Bearhaven port. The town of Rerrin is the largest settlement on the island. The village of Ballynakilla is also located there.

Whiddy Island is at the head of the bay near the south shore. It is the main petroleum terminus for Ireland, the harbour ideally suited for large oceangoing tankers. A Single Point Mooring (SPM) at the Whiddy Island oil terminal is operated by Zenith Energy Management. Bantry Bay was featured during a famous Gulf Oil commercial showing the supertanker "Universe Kuwait" that aired during the time of the Apollo moon landing in 1969.

Towns and villages around the bay include: Adrigole, Bantry, Ballylickey, Cahermore, Cappanolsha, Castletownbere (Castletown Bearhaven), Donemark, Foilakill, Gerahies, and Glengarriff. Main routes that follow parts of the bay include the R572 (part of the "Ring of Beara") and the N71. The Bantry Bay Golf Club is at the head of the bay, across from Whiddy Island. The O'Sullivan Beara Dunboy Castle is just across from Bere Island in Berehaven Harbour. "Copper John" Puxley's Manor is in Dunboy. Daphne du Maurier’s novel ‘Hungry Hill’ is based on the Puxley family's involvement in the area's tin and copper mining industry. 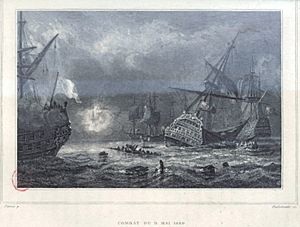 19th-century depiction of the battle.

The Battle of Bantry Bay occurred in 1689, during the Nine Years' War, between English and French fleets.

The town of Bantry, at the head of the bay, is associated with the Irish Rebellion of 1798 through an earlier attempt, led by Irish revolutionary Wolfe Tone, to launch a rebellion there in December 1796. A French fleet, consisting of 43 ships carrying 15,000 troops, had divided mid-Atlantic into smaller groups to avoid interception by the Royal Navy and planned to reform at Bantry Bay. The bulk of the fleet arrived successfully but several ships, including the flagship Fraternité carrying General Hoche, were delayed. While awaiting their arrival, bad weather intervened and the lack of leadership, together with uneasiness at the prospect of being trapped, forced the decision to return to France. Tone wrote of the expedition in his diary, saying that "We were close enough to toss a biscuit ashore in Ahabeg in Berehaven Harbour." The square in Bantry is today named after Wolfe Tone. 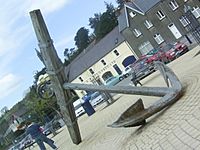 Anchor from the French Armada of 1796, discovered off northeast of Whiddy island, Bantry Bay, 1981 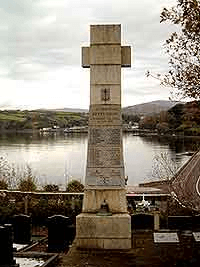 On 8 January 1979, 50 people were killed when a French oil tanker, the Betelgeuse, was offloading at Whiddy Island when it caught fire, exploded, and broke into three pieces. The bay has had numerous shipwrecks over the years. In 1981, while cleanup efforts using sonar sweeps for the Betelgeuse were under way, the wreck of the French frigate La Surveillante, which had been scuttled during a storm north of Whiddy Island on 2 January 1797, was found.

Bantry Inshore Search and Rescue Association (BISRA) provides an emergency lifeboat service to the Bantry Harbour community. Equipped with a high speed rescue RIB BISRA is a declared resource of the Irish Coastguard.

All content from Kiddle encyclopedia articles (including the article images and facts) can be freely used under Attribution-ShareAlike license, unless stated otherwise. Cite this article:
Bantry Bay Facts for Kids. Kiddle Encyclopedia.