Altar Wedge Tomb is located 6.7 km (4.2 mi) WSW of Schull, on a cliffedge near Toormore Bay.

Wedge tombs of this kind were built in Ireland in the late Neolithic and early Bronze Age, c. 2500–2000 BC.

Cremated burials took place in 2000 BC and pit burials c. 1200 BC. Around AD 200 a pit was dug and filled in with fish, shellfish and cetacean bones, presumably as a ritual practice.

Despite the name, there is no evidence that the "altar" was ever used for sacrifice. It was used as a Mass rock in the 18th century AD. A holy well stood across the road. 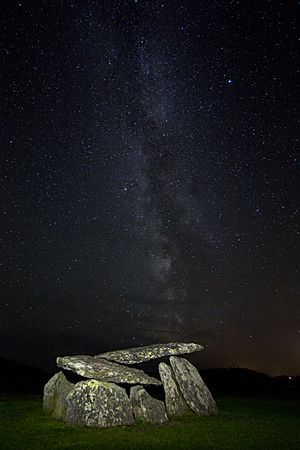 The entrance was aligned ENE–WSW, possibly with Mizen Peak (Carn Uí Néit) and maybe to catch the setting sun at Samhain (November 1).

A roof-stone 2.7 m (8 ft 10 in) long, is still above the east end, and a second rests against the westerly stones at either side of the gallery. There is no cairn material or evidence of kerbstones; they may have been removed for road construction in the 19th century AD.

All content from Kiddle encyclopedia articles (including the article images and facts) can be freely used under Attribution-ShareAlike license, unless stated otherwise. Cite this article:
Altar Wedge Tomb Facts for Kids. Kiddle Encyclopedia.