Mizen Head is one of the extreme points of the island of Ireland and is a major tourist attraction, noted for its dramatic cliff scenery. One of the main transatlantic shipping routes passes close by to the south, and Mizen Head was, for many seafarers, the first (or last) sight of Europe. The tip of the peninsula is almost an island, cut off by a deep chasm, now spanned by a bridge; this gives access to an old signal station, a weather station, and a lighthouse. The signal station, once permanently manned, is now a museum housing displays relating to the site's strategic significance for transatlantic shipping and communications, including the pioneering efforts of Guglielmo Marconi. The "99 steps" which formed part of the original access route have been supplemented by a series of paths and viewing platforms, and a full range of visitor facilities is available at the entrance to the site. The villages of Ballydehob, Crookhaven, Goleen, and Schull are located on the peninsula to the east. 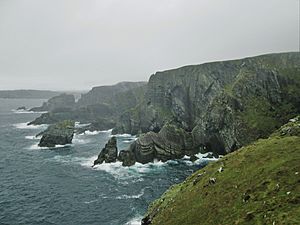 Mizen Head is not the most southerly point on the mainland of Ireland; nearby Brow Head holds that title, being several metres further south. Nevertheless, geography books have long measured the length of Ireland, diagonally northeast-to-southwest, as "from Fair Head to Mizen Head" or north-to-south "from Malin Head to Mizen Head".

All content from Kiddle encyclopedia articles (including the article images and facts) can be freely used under Attribution-ShareAlike license, unless stated otherwise. Cite this article:
Mizen Head Facts for Kids. Kiddle Encyclopedia.