Brow Head (Irish: Ceann Bró) is the most southerly point of mainland Ireland. It is in the rural townland of Mallavogue near Crookhaven in County Cork, Ireland. It is 3.8 km east of Mizen Head at latitude 51.43ºN. 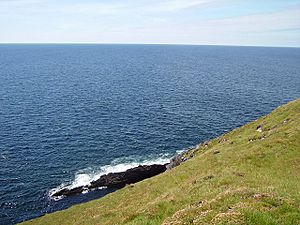 The signal tower on Brow Head is part of a chain of towers built in 1804, during British rule, to give warning of a French invasion. Originally the signalling was done with a system of flags and blackballs on masts. Brow Head, or Mallavogue, was a mining area in the 19th century and the remains of the mines and the miners' houses can still be seen. The first copper ore was extracted here in 1852 and mining continued intermittently until at least 1906.

In 1904, Marconi’s Wireless Telegraph Co. Ltd. entered into a contract with the Commissioners of Irish Lights to put telegraphic equipment and aerials on the Fastnet Rock. The telegraphic station was moved up to Brow Head where the signal tower equipment had been used for so long to contact passing ships. Messages were sent to the Fastnet Rock Lighthouse by signalling methods and then relayed to the Brow Head station by wireless telegraphy for relaying on to the recipients.

All content from Kiddle encyclopedia articles (including the article images and facts) can be freely used under Attribution-ShareAlike license, unless stated otherwise. Cite this article:
Brow Head Facts for Kids. Kiddle Encyclopedia.