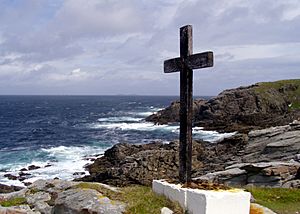 Looking out into the North Atlantic from Malin Head

Malin Head (Irish: Cionn Mhálanna) is located on the Inishowen Peninsula, County Donegal, Ireland and is the most northerly point of mainland Ireland. The northernmost tip is the headland called Dúnalderagh and is located at latitude 55.38ºN. Malin Head gives its name to the Malin sea area. Malin Head encompasses an area north of the Black Mountain, there is no specific point which details the location of Malin Head and the area is peppered with many local place names of Norse and Irish origin. There is a weather station on the head, which is one of 22 such stations whose reports are broadcast as part of the BBC Shipping Forecast. A tower built in 1805 is situated on Altnadarrow also known locally as the Tower hill.

Dúnalderagh at Malin Head is the most northerly point of the Irish mainland. Dúnalderagh is about 16 km (10 mi) north of the village of Malin. The island of Inishtrahull is further north, located approximately 10 km (6 mi) northeast of Malin Head. Further north still is the most northerly landfall of Ireland, Tor Beg rock. Malin Head is home to small businesses such as pubs, restaurants, shops and a large call centre called Forward Emphasis International, which employs many of the local residents.

To the northeast Inistrahull Island can be seen. The first lighthouse on the island was put into operation in 1813, and the light flashes every 30 seconds.

Below Altnadarrow to the east lies Ballyhillion beach, a unique raised beach system of international scientific importance. The very distinct shorelines show the changing relationship between the sea and the land from the time the glaciers began to melt, some 15,000 years ago. At that time County Donegal was depressed by the weight of an immense ice sheet, so the level of the sea, relative to today's shore, was up to 80 feet higher than today.

Scenes from Star Wars: The Last Jedi were filmed in Malin Head.

Weather reports commenced in Malin Head in 1885. In 1955 a new Meteorological station was built beside the coastguard station by Met Éireann. Hourly data points, which include sunshine, wind, rain etc, are recorded here.

Malin Head has a temperate oceanic climate (Köppen class Cfb) High winds and storms are a notable presence for much of the year. Summers are typically mild bordering on cool, while winters have cool days and crisp nights. Yearly sunshine is very low but usually peaks during the month of May. 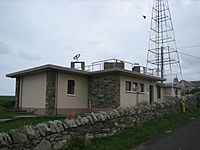 A military watchtower was built on Altnadarrow in 1805, during the Napoleonic Wars. Around 1902, a signal station used by the Marconi Company was built close to the old Napoleonic watchtower. Both of these buildings still stand.

During The Emergency (World War II), the Government of Ireland allowed the British Government to site two radio direction finders on Malin Head. This top-secret operation was mentioned in The Cranborne Report. The RDF equipment was used by Allied naval and air forces to monitor U-boat and aerial activity in the North Atlantic. A detailed history of radio at Malin Head, Marconi Wireless Radio Station: Malin Head from 1902 was published in 2014.

To the north of Altnadarrow and just before Dúnalderagh, a ground marker reading '80 EIRE' can be seen in large letters that were formed from placing stones together to form the letters. This was to signify to overflying planes that they were crossing Irish territory and that Ireland was neutral.

Malin Head is an ideal vantage point from which to view the autumnal movements of seabirds such as gannets, shearwaters, skuas, auks and others, on their southward migration flights. Rarities have included Black-browed Albatross, Feas Petrel and many other rare seabirds have been recorded here. This is also a good vantage point for viewing Basking sharks and the resident pod of Bottle-nosed Dolphins.

All content from Kiddle encyclopedia articles (including the article images and facts) can be freely used under Attribution-ShareAlike license, unless stated otherwise. Cite this article:
Malin Head Facts for Kids. Kiddle Encyclopedia.