Bandon ( Irish: Droichead na Bandan) is a town in County Cork, Ireland. It lies on the River Bandon between two hills. The name in Irish means Bridge of the Bandon, a reference to the origin of the town as a crossing-point on the river. In 2004 Bandon celebrated its quatercentenary. The town, sometimes called the Gateway to West Cork, had a population of 6,640 at the 2011 census.

In September 1588, at the start of the Plantation of Munster, Phane Beecher

Buildings sprang up on both sides of the river and over time a series of bridges linked both settlements. Like other towns in Cork it benefitted greatly from the patronage of Richard Boyle, 1st Earl of Cork, although he was not, as he liked to claim, its "founder". In 1689 it was the scene of a clash between Jacobite and Williamite forces during the War of the Two Kings. After an uprising by Protestant inhabitants who expelled the Irish Army garrison, a larger force under Justin MacCarthy arrived and retook the town. Sir John Moore, later leader of the British Army, who was killed in the Peninsular War at Coruña in Spain in 1809, was governor of the town in 1798.

In the 19th century, the town grew as a leading industrial centre which included brewing, tanning, distilling, corn and cotton milling. The now closed Allman's Distillery produced at one point over 600,000 gallons of whiskey annually. The industrial revolution in the 1800s and the advent of the railways had a profound effect on the socioeconomic and cultural ecosystem of the area. Local weaving operations could not compete with mass-produced cheap imports. 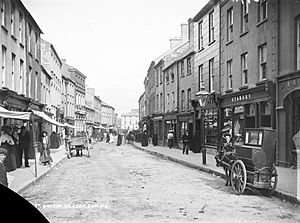 Major General Arthur Ernest Percival was commander of the British garrison in Bandon in 1920–21 during the Irish War of Independence. He was subsequently the commanding officer of the British troops who surrendered Singapore to the Japanese forces in 1941. In 1945 he was invited by Douglas MacArthur to witness the surrender of Japanese forces in Tokyo in 1945 which ended the Second World War. Irish army leader Michael Collins was killed in an ambush at Béal na Bláth, about 9.6 km (6.0 mi) outside Bandon.

Between 1911 and 1926, the non-Catholic population of Bandon dropped from 688 (22% of the population) to 375 (13% of the population), a decline of 45.5%. Peter Hart argued in The IRA and its Enemies (1998) that during the Irish War of Independence, Bandon's Protestant population, which was largely unionist, suffered from Irish Republican Army (IRA) reprisals.

Castle Bernard, the seat of Lord Bandon, was also burned in the Irish War of Independence.

Bandon has a twin city agreement with Bandon, Oregon in the United States. That city was founded in 1873 by Lord George Bennet, a native of the Irish Bandon who named the American one after it, and who is known especially for having introduced gorse into the US ecology with some disastrous results.

In Harry Potter and The Chamber of Secrets, Gilderoy Lockhart claims to have defeated the 'Bandon Banshee'.

All content from Kiddle encyclopedia articles (including the article images and facts) can be freely used under Attribution-ShareAlike license, unless stated otherwise. Cite this article:
Bandon, County Cork Facts for Kids. Kiddle Encyclopedia.