Bandon is a city in Coos County, Oregon, United States, on the south side of the mouth of the Coquille River. It was named by George Bennet, an Irish peer, who settled nearby in 1873 and named the town after Bandon in Ireland, his hometown. The population was 3,066 at the 2010 census.

Before 1850, the Coquille Indians lived in the area. Then in 1851, gold was discovered at nearby Whiskey Run Beach by French Canadian trappers, though the gold rush did not have much of an impact on the area. In 1852, Henry Baldwin, from County Cork, Ireland, was shipwrecked on the Coos Bay bar and walked into this area. The first permanent European settlers came in 1853 and established the present town site. In 1856, the first conflicts with Indigenous Americans in the United States arose and those were sent to the Siletz Reservation. In 1859, the boat Twin Sisters sailed into the Coquille River and opened the outlet for all inland produce and resources.

Bandon was founded by the Irish peer George Bennett in 1873. George Bennett, his sons Joseph and George, and George Sealey came from Bandon, Ireland. The following year the town's previous name of Averille was changed to Bandon after the town of the same name in Ireland. The next year, Joseph Williams and his three sons arrived, also from Bandon, Ireland. In 1877, the post office was established. In 1880, cheese making began. That same year, Congress appropriated money to build the jetty. In 1883, the first sawmill, school house, and Catholic church were built. In 1884, the U.S. Army Corps of Engineers began construction on the jetty. 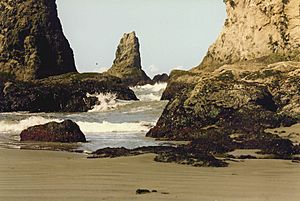 Rock formations along the coast in Bandon (1994)

George Bennett also introduced gorse (Ulex europaeus) into the local area, which in the following decades went wild and became a nuisance in both the town and in the neighboring countryside. Gorse, a spiny plant, grows so thickly a person cannot walk through it. It is also a very oily plant, which easily catches fire.

Cranberries have been grown in Bandon since 1885, when Charles McFarlin planted vines he brought from Massachusetts. McFarlin had originally come to pan for gold in California. He did not make his fortune, or even a living, so he turned to what he knew best. He brought vines from Cape Cod and planted them in the state's first cranberry bog near Hauser. This bog produced cranberries for eight decades. His variety adapted to growing conditions on the west coast. The variety was named McFarlin in his honor and was the principal variety grown on the west coast until overtaken by the Stevens variety. Bandon is also the location of the first cranberry bogs to be wet harvested, which is done by building dikes around the bogs then flooding them.

In 2010, Bandon was named one of the "Coolest Small Towns in America" by BudgetTravel.

On September 26, 1936, a fire burned several miles of forest east of town. But a sudden shift in the wind drove the flames swiftly westward. Ignited by the forest fire, the town’s abundant gorse became engulfed in flames, Bandon resident D.H. Woomer told The Coos Bay Times. Bandon's entire commercial district was destroyed. The total loss stated at the time was $3 million USD, with 11 fatalities.

Ironically, the gorse was first introduced to the Oregon Coast by the founder of Bandon, Lord George Bennett, from his native Ireland.

Firefighters found that burning gorse reacted to having water squirted on it like a kitchen grease fire—it simply spread burning gobs of gorse everywhere. Stewart Holbrook described this conflagration in his essay "The Gorse of Bandon."

Part of the commercial district had been erected on wooden pilings jutting out over the Coquille River not far from the South Jetty, accommodating river traffic at the merchants' doors. After the 1936 fire, when Bandon began to be rebuilt, the new perimeter of the business district did not extend beyond the available land.

There is still gorse in Bandon today, but municipal codes strictly regulate how high and thick it may be allowed to get.

Bandon has a Marine West Coast-Mediterranean climate (Köppen Csb). Rain and overcast conditions are common in the winter months, while during the summer it is mostly dry. Snow can occur during the winter, however, this is not very common and usually occurs about once or twice a season. Below freezing temperatures are rare in the city, usually occurring about once or twice a winter. Extreme temperatures of 20 °F or −6.7 °C or colder are extremely rare, usually happening about once every five years. Summers are dry and cool with an average July high temperature of about 68 °F or 20 °C while lows are generally in the 50s °F. High temperatures in the mid-70s °F to the low 90s °F occur on average about once or twice every three or four years. Bandon’s highest reading of 100 °F (37.8 °C) occurred on September 21, 1990. The lowest reading of 8 °F (−13.3 °C) was observed only three months later on December 21, 1990.

There were 1,466 households of which 18.1% had children under the age of 18 living with them, 37.6% were married couples living together, 10.2% had a female householder with no husband present, 4.2% had a male householder with no wife present, and 48.0% were non-families. 39.6% of all households were made up of individuals and 20.8% had someone living alone who was 65 years of age or older. The average household size was 2.01 and the average family size was 2.62.

There were 1,287 households out of which 21.2% had children under the age of 18 living with them, 43.4% were married couples living together, 10.1% had a female householder with no husband present, and 42.8% were non-families. 36.1% of all households were made up of individuals and 19.0% had someone living alone who was 65 years of age or older. The average household size was 2.09 and the average family size was 2.71. 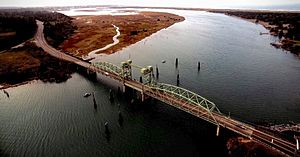 Sunset over the Pacific Ocean and part of the Oregon Islands National Wildlife Refuge. View is from Coquille Point in Bandon.

It is noteworthy that French writer Jules Verne, in his science fiction novel The Begum's Fortune, placed on virtually the precise site of Bandon his fictional Utopian community "Ville-France". The fictional community was given the foundation date of 1872—one year before the foundation of the actual Bandon. Ville-France was depicted as being founded by Doctor Sarrasin, a visionary French doctor; reaching a population of 100,000 within a few years of its creation and becoming world-famous as a model community; being granted by the US government the status of a virtually independent city state; and being involved in a vicious war with a rival city state on the other side of the Cascades, founded by an evil German scientist.

Bandon has one sister city:

All content from Kiddle encyclopedia articles (including the article images and facts) can be freely used under Attribution-ShareAlike license, unless stated otherwise. Cite this article:
Bandon, Oregon Facts for Kids. Kiddle Encyclopedia.