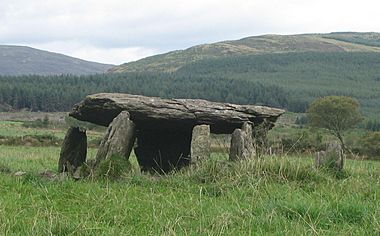 Glantane East is a megalithic complex situated 6.4 kilometres (4.0 mi) from Millstreet, County Cork, Ireland. It is set in the Keel River valley on the north-west upper slopes of Musherabeg mountain, in the townland of Glantane. The complex includes a wedge tomb, two stone circles and a pair of stone alignments.

The wedge tomb is known locally as "The Flags" and is 90 centimetres (35 in) in height, with a capstone 2.4 metres (7.9 ft) square resting on two sidestones and a backstone. Some of the double-walling remains in place while a 40-centimetre (16 in) stone is positioned between the two sidestones.

A stone circle lies in the field next to the wedge tomb. It is nearly 5 metres (16 ft) in diameter with five standing and six fallen stones, some of which now lie in the surrounding ditch which is at least partly stone-faced. In the center of the circle is a large hole, where it is assumed a boulder or boulder-burial once stood. The remaining stones vary in height from 0.5 to 1 metre (1.6 to 3.3 ft) and are surrounded by a 2.5-metre (8.2 ft) wide fosse and low bank. Two tall pillar-like stones are situated along the outer face of the fosse and 8m to the south-east of the circle. One is fallen.

All content from Kiddle encyclopedia articles (including the article images and facts) can be freely used under Attribution-ShareAlike license, unless stated otherwise. Cite this article:
Glantane East Facts for Kids. Kiddle Encyclopedia.