Finbarr of Cork facts for kids

Saint Finbar, Finnbar, or Finnbarr, in Irish Fionnbharra, very often abbreviated to Barra, (c. 550–25 September 623) was Bishop of Cork and abbot of a monastery in what is now Cork city, Ireland. He is patron saint of the city and of the Diocese of Cork. His feast day is September 25. 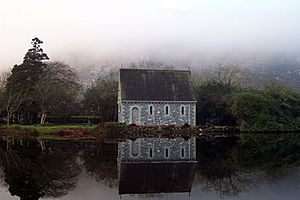 Born in Templemartin, near Bandon, and originally named Lóchán (modern form, Loan), he was the son of Amergin of Maigh Seóla, a skilled craftsman originally from Galway. He studied in Ossory, corresponding approximately to the present County Kilkenny. He was renamed "Fionnbharra" (Fairhead in Irish), reportedly when, on being tonsured, the presiding cleric remarked: "Is fionn barr (find barr, in the Irish of the time) Lócháin", meaning, "Fair is the crest of Loan"), and he then became known as "Findbarr" ("Fionnbarra" in modern Irish). He went on pilgrimage to Rome with some of the monks, visiting St David in Wales on the way back.

On completion of his education he returned home and lived for some time on an island in the small lake then called Loch Irce. The island is now called Gougane Barra (the little rock-fissure of Finnbarr). He is reputed to have built small churches in various other places, including one in Ballineadig, County Cork, called Cell na Cluaine, anglicised as Cellnaclona and sometimes referred to as Cloyne, causing it to be confused with Cloyne (Cluain Uamha) in east Cork. 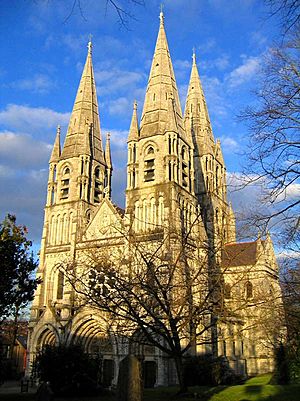 He settled for about the last seventeen years of his life in the area then known as Corcach Mór na Mumhan(the Great Marsh of Munster), now the city of Cork, where he gathered around him monks and students. This became an important centre of learning, giving rise to the phrase Ionad Bairre Sgoil na Mumhan. "Where Finbarr taught let Munster learn", is the motto of today's University College Cork in English but is not a translation of the Irish motto Ionad Bairre Sgoil na Mumhan which means "Finbarr's foundation, the School of Munster".

The church and monastery he founded in 606 were on a limestone cliff above the River Lee, an area now known as Gill Abbey, after a 12th-century Bishop of Cork, Giolla Aedha Ó Muidhin. It continued to be the site of the cathedral of his diocese. The present building on the site, owned by the Church of Ireland, is called Saint Fin Barre's Cathedral. The people of Cork often refer to the nearby Catholic church, also dedicated to St Finbarr, in Dunbar Street in the South Parish as 'the South Chapel', distinguishing it from the North Cathedral, the Catholic Cathedral of Saint Mary and Saint Anne, sometimes called 'the North Chapel'.

Finnbarr died at Cell na Cluaine, while returning from a visit to Gougane Barra. He was buried in the cemetery attached to his church in Cork.

There are at least five St. Finbarr's schools in England, Chelsea, Australia – at Ashgrove, Byron Bay, Invermay, Tasmania, Sans Souci (South Sydney, spelt St Finbar), East Brighton (Melbourne), Quilpie (South West Queensland) and Glenbrook, in the Blue Mountains. There is a St. Finbarr's school in Lagos, Nigeria. There is also a St. Finn Barr school in San Francisco, California. The original cathedral of the Diocese of Charleston, South Carolina, in the United States was named in honour of St. Finbarr and remained standing until the Great Fire of Charleston during the Civil War. It is believed to have been named so because John England, the first bishop of Charleston was originally from the country around Cork and was consecrated a bishop in Saint Fin Barre's Cathedral before travelling to the United States. In Coventry, England, St Finbarr's Social Club was named in honour of the saint during the late 1980s attracting large numbers from an Irish background to socialise. Upon demolition in 2006, a new housing scheme was completed in 2008 on the same site with the new road name of Finbarr Close.

All content from Kiddle encyclopedia articles (including the article images and facts) can be freely used under Attribution-ShareAlike license, unless stated otherwise. Cite this article:
Finbarr of Cork Facts for Kids. Kiddle Encyclopedia.