Ballyvourney (Irish: Baile Bhúirne, meaning Town of the Beloved, also spelled Baile Mhúirne ), is a Gaeltacht village in southwest County Cork, Ireland. It is a civil parish in the barony of Muskerry West, and is also an ecclesiastical parish in the Roman Catholic Diocese of Cloyne. Ballyvourney is part of the Cork North-West Dáil Constituency.

The village stretches along the N22 road which links Cork city (to the southeast) with Killarney (to the northwest). The nearest large town is Macroom, while the nearest international airport is Cork Airport. There is a proposal to construct 22 km of dual carriageway from Coolcour at the eastern side of Macroom, bypassing Macroom to the north and finishing west of Ballyvourney. Bus Éireann Expressway Route 40 between Rosslare Europort and Tralee runs through Ballyvourney.

The village lies on the River Sullane:

"The river Sullane has its source in the parish, in the mountains bordering on the county of Kerry, and after intersecting it longitudinally pursues an eastern course through the parish of Clondrohid to the town of Macroom, to the east of which, at the distance of a mile, it discharges itself into the river Lee;"

In this part of Cork, the rivers mainly drain longitudinally from west to east; this is true of the Lee and the Munster Blackwater. Between these rivers lies the valley of the Sullane. To the north of the parish, the Derrynasaggart Mountains and the Boggeragh Mountains separate the valley from the Blackwater valley. To the south, the upland area of Reananerree and the Shehies separate it from the Lee valley. The surrounding district of Muskerry straddles the counties of Cork and Kerry. The highest point in the parish, at 694m, is Mullaghanish (Irish: Mullach an Ois) located just northeast of the village.
While it is the western part of the county, it would not be considered to be part of the area informally known as West Cork because it lies north of the river Lee. Neither would it be thought part of the Golden Vale, unlike the rich pasture towns to the north of the Boggeragh mountains (e.g. Charleville). The mountainous terrain and poor quality of the land has instead made it a virtual enclave within the county, best expressed in the old Gaelic tuatha of Muskerry. As the tuatha was relatively less desirable from an economic viewpoint, it may explain why the Gaelic way of life persisted into the 20th century and why Muskerry attained Gaeltacht status.
Bantry Bay is the district's nearest point to the sea. It is accessed by bad minor roads over the Reananerree uplands to the neighbouring Gaeltacht parish of Béal Átha an Ghaorthaidh where the R584 road crosses the Lee, passes the Shehy Mountains via the Pass of Keimaneigh (Irish: Céim an Fhia) (meaning the "pass of the deer's leap") and thence to Ballylickey.

More specifically, it is one of the 24 civil parishes in the barony of Muskerry West. The barony is the namesake of Baron Muskerry. There are 47 townlands in the civil parish. 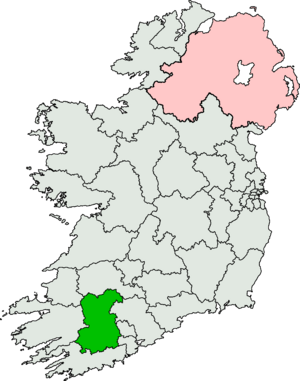 Historically, the people of Múscraige had the Corcu Loígde as their overlords. However, they switched allegiance to the Eóganachta and facilitated their rise to power as Kings of Munster. In "Griffith's Valuation of Ireland (1837)",

During the Irish War of Independence, the IRA ambushed a British rations lorry just south of Ballyvourney on 18 July 1921, resulting in the deaths of two British soldiers, including James Airy. 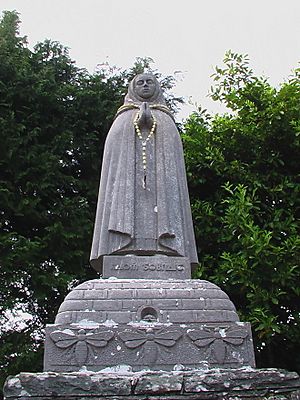 Today, the district gives its name to the Muskerry Gaeltacht which is an officially designated Irish-speaking area. While the inhabitants of the area know Irish well, English has been the predominant household and community language since the 1920s. According to the 2016 Census about 21% of the population of the "An Sliabh Riabhach" electoral division (where Ballyvourney is located) speak Irish on a daily basis outside the education system. The area's Gaeltacht status draws visitors—as does its architectural heritage.

The town is associated with Saint Gobnait and is the site of her abbey, cells and St. Gobnait's Well. Her Pattern Day, February 11, is still celebrated by the community. During a Mass at the well, everyone takes water from it. According to legend, Gobnait was born in County Clare in the 6th century. Fleeing from Clare, she took refuge in the Aran Islands, where she encountered an angel who instructed her to go on a journey. The angel told her that when she came upon nine white deer, that would be her place. Travelling south, she came to Clondrohid where she found three white deer. She followed them to Killeens, Ballymakeera where she saw six more. When she found the nine white deer in Baile Bhuirne, she stayed and founded a convent. The remains of the convent are still the locus of pilgrimage, which while it is ostensibly Christian, may well be pagan in origin.

The composer Seán Ó Riada is buried in the cemetery there. The abbey contains an example of a Sheela na Gig and there are a number of stone circles, stone rows and fulachtaí fia in the area.

Ballyvourney is the home of Ionad Cultúrtha, a regional cultural centre for the traditional and contemporary arts. It holds many music and visual art events.

The local national school is called Scoil Aban Naofa and is named after Aban, a saint associated with the area.

The secondary school, Coláiste Ghobnatan, was formed in 1989 following the merger of Coláiste Iosagáin and Scoil Ghobnatan. According to the school principal, Breandán O Lionáird,

"The College is named in honour of Saint Gobnait, patron Saint of Baile Bhúirne and indeed we place all our work under her protection.".

The grounds of "Coláiste Íosagáin", a former De La Salle college, was where Song for a Raggy Boy was filmed.

The film The Wind That Shakes the Barley was also filmed in nearby locations. 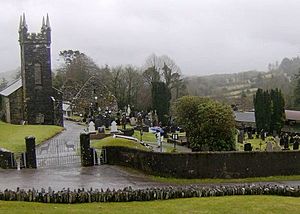 The bars and restaurants in the village are "The Mills Inn", "The Abbey Hotel", "The Hibernian", "The Crúiscín Lán"and "The Village Takeaway & Diner". The Mills Inn is built on the site of the former police barracks.

Employment opportunities in Ballyvourney range from agricultural, industrial to hospitality sectors. Údarás na Gaeltachta provide grants for businesses, many of which are situated in Ballyvourney's industrial estate.

The Senior Gaelic football club, Naomh Abán GAA, has a number of championship titles to its name. Anthony Lynch, a native of Ballyvourney and a player on the local football team also plays for the Cork senior football team.

All content from Kiddle encyclopedia articles (including the article images and facts) can be freely used under Attribution-ShareAlike license, unless stated otherwise. Cite this article:
Ballyvourney Facts for Kids. Kiddle Encyclopedia.