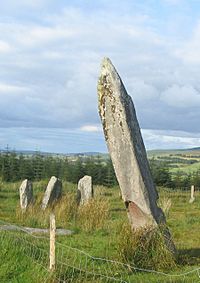 The Boggeragh Mountains (Irish: An Bhograch) are located in County Cork, Ireland, with the Munster Blackwater to the north and the River Lee to the south of the hills. With an elevation of 644 m (2,113 ft), the highest peak is Musheramore (Irish: Muisire Mór). The landscape consists of peat blanket bog, grassland, streams and areas of forestry. The mountains were formed from Old Red Sandstone deposited during the Devonian Period. They were shaped by glacial erosion during the last glacial period.

Construction of a wind farm in the area started in September 2009. In February 2010 19 units of Vestas V90-3MW MW wind turbines are up and running.

All content from Kiddle encyclopedia articles (including the article images and facts) can be freely used under Attribution-ShareAlike license, unless stated otherwise. Cite this article:
Boggeragh Mountains Facts for Kids. Kiddle Encyclopedia.