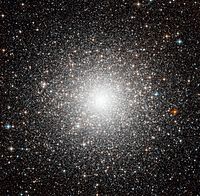 The constellation Sagittarius (meaning "the Archer") is a group of stars in one area of the night sky. The stars are in the shape of a centaur archer. This constellation is part of the Western zodiac.

The Milky Way is at its densest near Sagittarius, as this is where the galactic center lies. Consequently, Sagittarius contains many star clusters and nebulae. One of the brightest of the star clusters is Messier 55, about 7.5° west of δ Sgr.

The complex radio source Sagittarius A is here. Astronomers believe that one of its components, known as Sagittarius A*, is associated with a supermassive black hole at the center of the galaxy, with a mass of 2.6 million solar masses.

All content from Kiddle encyclopedia articles (including the article images and facts) can be freely used under Attribution-ShareAlike license, unless stated otherwise. Cite this article:
Sagittarius (constellation) Facts for Kids. Kiddle Encyclopedia.