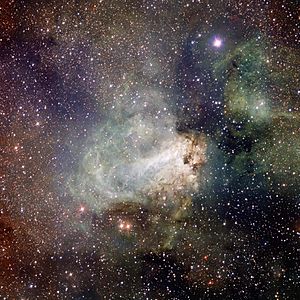 The Omega Nebula (nicknamed the Swan Nebula) is an H II region in the constellation of Sagittarius. It is about 5,500 light-years away from Earth. It was discovered by Philippe Loys de Chéseaux in 1745. Charles Messier added it to his catalog as M17 on the night of 3 June 1764. M17 has more names than any other deep-sky object. In addition to the Omega Nebula and Swan Nebula, it is also called the Horseshoe Nebula, the Checkmark Nebula and the Lobster Nebula. Omega can be seen through binoculars or a small telescope.

All content from Kiddle encyclopedia articles (including the article images and facts) can be freely used under Attribution-ShareAlike license, unless stated otherwise. Cite this article:
Omega Nebula Facts for Kids. Kiddle Encyclopedia.