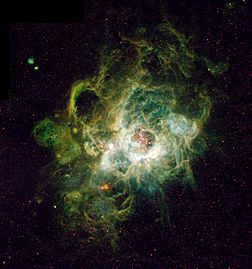 NGC 604, a giant H II region in the Triangulum galaxy 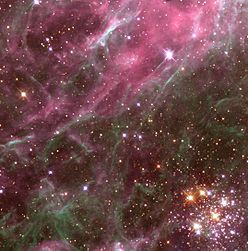 A small portion of the Tarantula nebula, a giant H II region in the Large Magellanic Cloud

An H II region is a region where huge blue stars are formed from hydrogen. They are named after the ionised atomic hydrogen which they produce: H II.

The stars form inside a large cloud of hydrogen gas. The short-lived blue stars formed in these regions give off huge amounts of ultraviolet light. This ionizes the surrounding gas.

H II regions can be several hundred light-years across. The first known H II region was the Orion nebula, which was discovered in 1610. These regions have extremely varied shapes. They often appear clumpy and filamentary, sometimes showing bizarre shapes such as the Horsehead nebula.

H II regions give birth to thousands of stars over several million years. Eventually, this produces a star cluster. In the end, supernova explosions and strong stellar winds from the most massive stars blow away the gases of the H II region. This leaves behind behind a cluster of stars such as the Pleiades.

H II regions can be seen at huge distances in the universe.The study of extragalactic H II regions helps to fix the distance and chemical composition of other galaxies.

Some galaxies have huge H II regions, with tens of thousands of stars. Examples include the 30 Doradus region in the Large Magellanic Cloud and NGC 604 in the Triangulum galaxy.

All content from Kiddle encyclopedia articles (including the article images and facts) can be freely used under Attribution-ShareAlike license, unless stated otherwise. Cite this article:
H II region Facts for Kids. Kiddle Encyclopedia.