Sagittarius A* facts for kids

Sagittarius A* is a bright object at the center of the Milky Way Galaxy.

It was discovered betwwen the 13 and 15 february 1974 by the astronomers Bruce Balick and Robert Brown. It is a radio source, giving off strong radio waves. It is near the border of the constellations Sagittarius and Scorpius. It is part of a larger astronomical feature called Sagittarius A. Astronomers think it is the site of a supermassive (very large) black hole. In 2002, a team of astronomers informed about the movement of the star S2 near Sagittarius A* during a cycle of 10 years. Agreeing with this information, they discard the posibility that said Sgr A* has got dark clusters inside it. 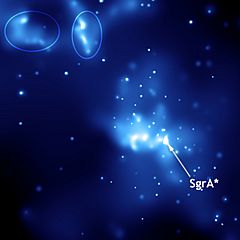 Other image of the Chandra X-Ray Telescope

All content from Kiddle encyclopedia articles (including the article images and facts) can be freely used under Attribution-ShareAlike license, unless stated otherwise. Cite this article:
Sagittarius A* Facts for Kids. Kiddle Encyclopedia.