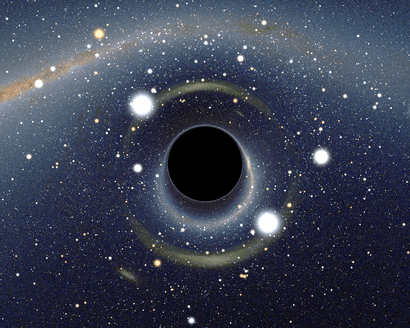 Simulated view of a black hole (center) in front of the Large Magellanic Cloud. Note the gravitational lensing effect, which produces two enlarged but highly distorted views of the Cloud. Across the top, the Milky Way disk appears distorted into an arc.

Hawking radiation is black body radiation which is emitted by black holes, due to quantum effects near the event horizon. It is named after the physicist Stephen Hawking, who provided a theoretical argument for its existence in 1974.

Hawking radiation reduces the mass and the energy of the black hole and is therefore also known as black hole evaporation. Because of this, black holes that lose more mass than they gain through other means are expected to shrink and ultimately vanish. Micro black holes (MBHs) are predicted to be larger net emitters of radiation than larger black holes and should shrink and dissipate faster.

All content from Kiddle encyclopedia articles (including the article images and facts) can be freely used under Attribution-ShareAlike license, unless stated otherwise. Cite this article:
Hawking radiation Facts for Kids. Kiddle Encyclopedia.