Nergal, Nirgal, or Nirgali is a deity that was worshipped throughout ancient Mesopotamia (Akkad, Assyria, and Babylonia) with the main seat of his worship at Cuthah represented by the mound of Tell-Ibrahim. Other names for him are Erra and Irra.

Nergal is mentioned in the Hebrew Bible as the deity of the city of Cuth (Cuthah): "And the men of Babylon made Succoth-benoth, and the men of Cuth made Nergal" (2 Kings, 17:30).

According to the Talmudists, his emblem was a cockerel and Nergal means a "dunghill cock", although standard iconography pictured Nergal as a lion.

He is a son of Enlil and Ninlil, along with Nanna and Ninurta. 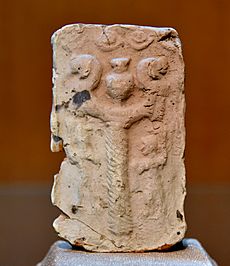 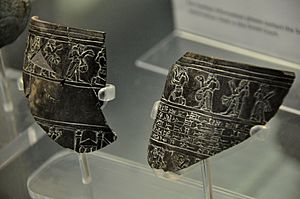 Fragments of a vessel dedicated to the temple of Nergal in Nineveh, showing Shalmaneser III kneeling before Nergal, currently held in the British Museum in London

Nergal seems to be, in part, a solar deity, sometimes identified with Shamash, but only representative of a certain phase of the sun. Portrayed in hymns and myths as a god of war and pestilence, Nergal seems to represent the sun of noontime and of the summer solstice that brings destruction, high summer being the dead season in the Mesopotamian annual cycle. He has also been called "the king of sunset". Over time Nergal developed from a war god to a god of the underworld. In the mythology, this occurred when Enlil and Ninlil gave him the underworld.

Nergal was also the deity who presides over the netherworld, and who stands at the head of the special pantheon assigned to the government of the dead (supposed to be gathered in a large cave known as Aralu or Irkalla). In this capacity, he has associated with him a goddess Allatu or Ereshkigal, though at one time Allatu may have functioned as the sole mistress of Aralu, ruling in her own person. In some texts, the god Ninazu is the son of Nergal and Allatu/Ereshkigal.

Ordinarily, Nergal pairs with his consort Laz. Standard iconography pictured Nergal as a lion, and boundary-stone monuments symbolise him with a mace surmounted by the head of a lion.

In the late Babylonian astral-theological system, Nergal is related to the planet Mars.

The Wrath of Erra

In this myth, Nergal is feeling dull and bored. To wake himself up, he decides to attack Babylon. However, Babylon is under the protection of Marduk, the most powerful of the gods. Nergal travels to Babylon on the ruse of a friendly visit. Pretending to show shock at the appearance of Marduk's clothing, he convinces the god to get a change of clothing and leave the city. Once Marduk has left Babylon, Irra attacks the city. People are slain in the streets. Soon Irra is satisfied and stops the attack and makes a prophecy about a great leader to protect the people.

According to this myth, the gods have created a banquet for which all deities are invited. However, Ereshkigal is unable to leave the underworld. Instead, she sends her son Namtar to take a share of the feast. When Namtar arrives, the other deities rise out of respect except for Erra. Insulted, Namtar goes home and tells his mother. Enki and other gods tell Nergal to enter the underworld. Nergal takes with him 14 demons. When he arrives, the gatekeeper Neti gets orders from Ereshkigal to allow him through the seven gates, stripping him of everything until the throne room, where he would be killed. But at each gate, Nergal posts two demons. When he gets to the throne he knocks over Namtar and drags Ereshkigal to the floor. He is about to kill her with his ax when she pleads for her life, promising her as his wife and to share her power with him. He consents. However, Nergal must still leave the underworld for six months, so Ereshkigal gives him back his demons and allows him to traverse the upper world for that time, after which he returns to her. This myth shows how war is fought in seasons.

Because he was a god of fire, the desert, and the Underworld and also a god from ancient paganism, later Christian writers sometimes identified Nergal as a demon and even identified him with Satan.

All content from Kiddle encyclopedia articles (including the article images and facts) can be freely used under Attribution-ShareAlike license, unless stated otherwise. Cite this article:
Nergal Facts for Kids. Kiddle Encyclopedia.