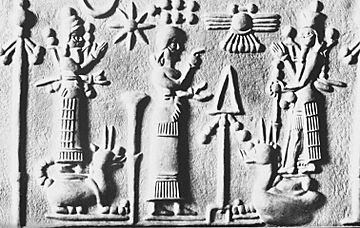 Nabu is the ancient Mesopotamian patron god of literacy, the rational arts, scribes and wisdom.

Nabu was worshiped by the Babylonians and the Assyrians. Nabu was known as Nisaba in the Sumerian pantheon and gained prominence among the Babylonians in the 1st millennium BC when he was identified as the son of the god Marduk.

Nabu was worshipped in Babylon's sister city Borsippa, from where his statue was taken to Babylon each New Year so that he could pay his respects to his father. Nabu's symbols included a stylus resting on a tablet as well as a simple wedge shape; King Nabonidus, whose name references Nabu, had a royal sceptre topped with Nabu's wedge. Clay tablets with especial calligraphic skill were used as offerings at Nabu's temple. His wife was the Akkadian goddess Tashmet.

Nabu was the patron god of scribes, literacy, and wisdom. He was also the inventor of writing, a divine scribe, the patron god of the rational arts, and a god of vegetation. As the god of writing, Nabu inscribed the fates assigned to men and he was associated with the scribe god Ninurta. As an oracle he was associated with the Mesopotamian moon god Sin.

Nabu wore a horned cap, and stood with his hands clasped in the ancient gesture of priesthood. He rode on a winged dragon known as Sirrush that originally belonged to his father Marduk. In Babylonian astrology, Nabu was identified with the planet Mercury.

Nabu was continuously worshipped until the 2nd century, when cuneiform became a lost art.

Nabu's cult spread to ancient Egypt. Nabu was one of five non-Egyptian deities worshipped in Elephantine.

All content from Kiddle encyclopedia articles (including the article images and facts) can be freely used under Attribution-ShareAlike license, unless stated otherwise. Cite this article:
Nabu Facts for Kids. Kiddle Encyclopedia.