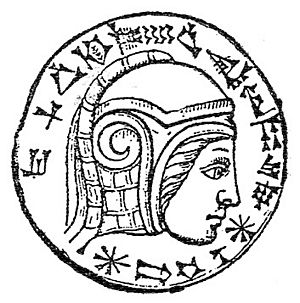 The term Neo-Babylonian Empire (also known as Chaldea) is talking about the Babylonian era during the 11th, or Chaldean, dynasty.

It was ruled by this dynasty between 626 BC when Nabopolassar rebelled against Assyria till 539 BC when Cyrus the Great captured the city of Babylon. The king Nebuchadnezzar II ruled this kingdom from 605 BC - 562 BC. Chaldea started out as referring to the southern part of Babylonia until a Chaldean became the king of Babylon.

All content from Kiddle encyclopedia articles (including the article images and facts) can be freely used under Attribution-ShareAlike license, unless stated otherwise. Cite this article:
Neo-Babylonian Empire Facts for Kids. Kiddle Encyclopedia.